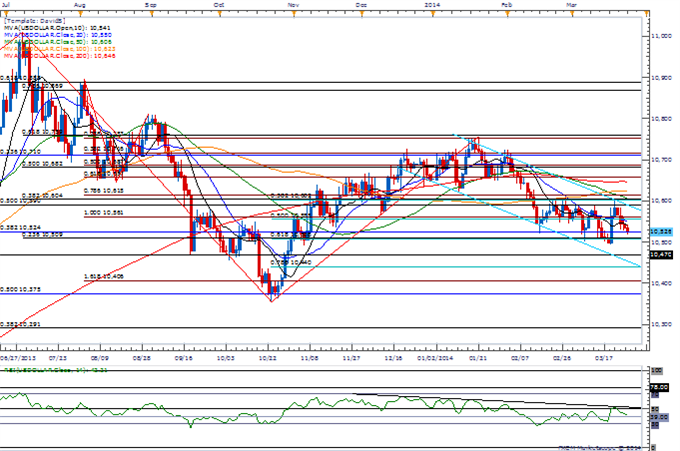 Despite the larger-than-expected rebound in U.S. Durable Goods Orders, the Dow Jones-FXCM U.S. Dollar Index (Ticker: USDollar) slipped to a fresh weekly low of 10,520, and the greenback may continue to carve a series of lower highs & lower lows going into April as the bearish trend remains in play.

It seems as though the unexpected decline in Non-Defense Capital Goods Orders ex Aircrafts, a proxy for future business investments, generated the bearish dollar reaction as it dampens the outlook for growth and inflation, and the reserve currency may face additional headwinds over the near-term should the fundamental developments coming out of the world’s largest economy undermine the Federal Open Market Committee’s (FOMC) scope to normalize monetary policy sooner rather than later.

With that said, we’ll continue to watch the 10,470 pivot as the greenback looks poised for a lower low, and the bearish sentiment surrounding the reserve currency may gather pace in April should the developments coming out of the world’s largest economy dampen the prospects for a stronger recovery in 2014.

US Dollar under Pressure, but Key Factor Could Finally Bring Relief 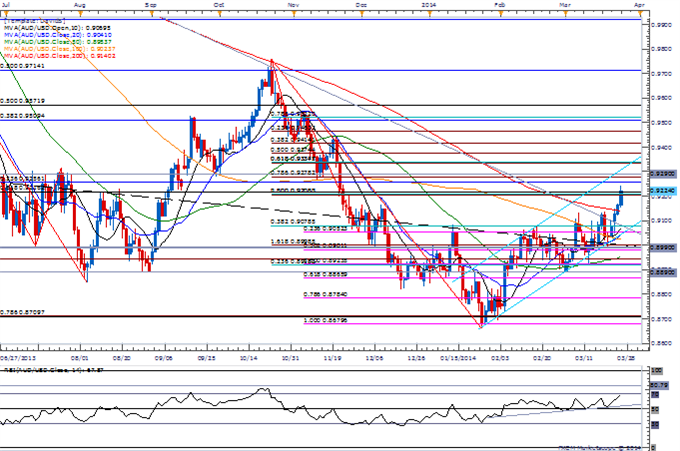 The greenback weakened against two of the four components, led by a 0.72 percent rally in the Australian dollar, and the higher-yielding currency may continue to retrace the decline from back in October as there appears to be a shift in the policy outlook.

Indeed, Reserve Bank of Australia (RBA) Governor Glenn Stevens sounded increasingly upbeat towards the $1T economy as the central bank head sees the region growing slightly above 3 percent, but argued that the long-run level for the Australian dollar should be lower than present as the terms of trade deteriorate.

Nevertheless, it seems as though the RBA’s verbal intervention will continue to have a limited impact on the AUDUSD as Governor Stevens adopts a more neutral tone for monetary policy, and we will continue to watch the topside targets ahead of the central bank interest rate decision on March 31 as price & RSI retains the bullish trend from earlier this year.