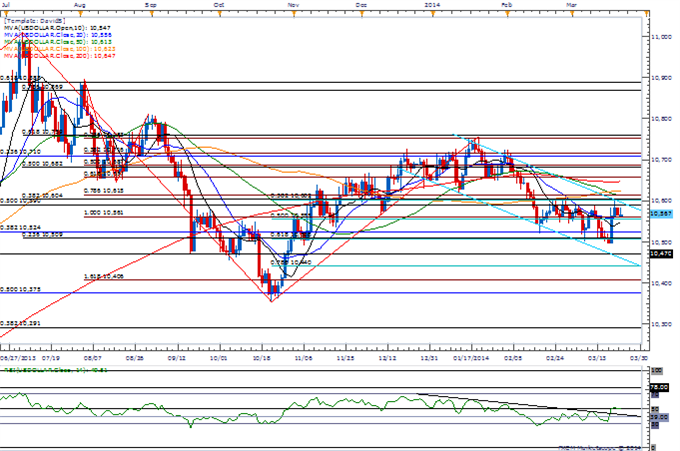 The Dow Jones-FXCM U.S. Dollar Index (Ticker: USDollar) remains at risk for further losses following the failed attempts to close above the 10,590 region, and the greenback may continue to carve a series of lower highs & lower lows should the fundamental developments coming out of the U.S. economy dampen the outlook for growth and inflation.

The limited follow-through subsequent to the Federal Open Market Committee (FOMC) meeting suggests market participants remain bearish against the greenback as price retains the downward trending channel from earlier this year, and reserve currency may continue to trade heavy over the remainder of the month as Fed officials remain in no rush to normalize monetary policy.

Indeed, San Francisco Fed President John Williams, who closely worked under Chair Janet Yellen, argued that the policy outlook has not changed amid the ongoing slack in the real economy, and went onto say that there’s limited scope for the central bank to normalize monetary policy sooner rather than later amid the persistent treat for disinflation.

With that said, a move and a close below the 10,555 (50.0 percent Fibonacci retracement) may fuel a more meaningful run at the 10,470 pivot, and the reserve currency may face additional headwinds in the coming days should we see a growing number of Fed officials talk down interest rate expectations.

US Dollar Unlikely to Break to Fresh Highs - Time to Sell? 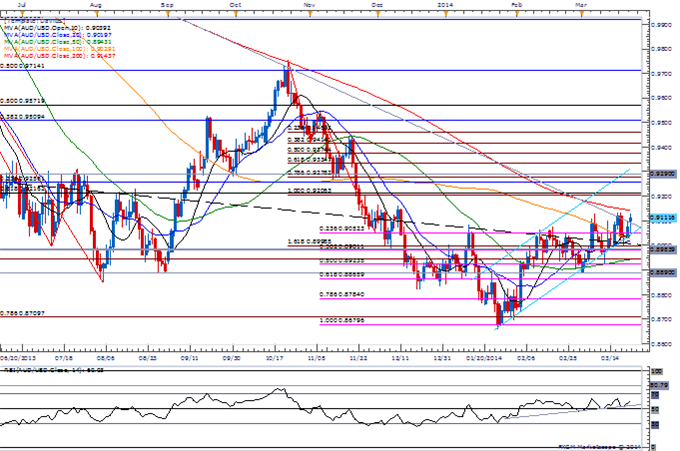 Two of the four components strengthened against the greenback, led by a 0.35 percent in the Australian dollar, but it seems as though the AUDUSD will remain limited by the 200-Day SMA (0.9143) over the next 24-hours of trade as it has yet to fill the gap from the weekly open.

Nevertheless, the technical outlook for the AUDUSD continues to favor the topside objectives as price & the Relative Strength Index (RSI) retains the bullish trend from earlier this year, but the pair may preserve the monthly range ahead of the Reserve Bank of Australia (RBA) meeting on March 31 as market participants weigh the outlook for monetary policy.

The AUDUSD may lose its appeal should RBA Governor Glenn Stevens may take a more aggressive approach in talking down the higher-yielding currency, and the central bank may sound more dovish this time around in an effort to further assists with the rebalancing of the $1T economy.