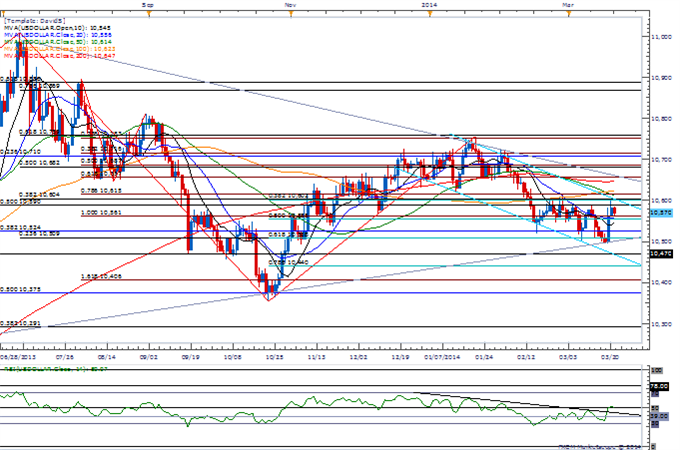 The near-term outlook for the Dow Jones-FXCM U.S. Dollar Index (Ticker: USDollar) remains constructive as the greenback rallied to a fresh monthly high of 10,600, and the reserve currency may continue to retrace the decline from earlier this year amid the shift in the Fed policy outlook.

Even though the USDOLLAR remains stuck in the downward trending channel, an important low appears to be in place following the bullish engulfing candle from earlier this week, and a closing price above the 10,590 (50.0 percent Fibonacci retracement) should pave the way for a more material rebound in the greenback as the bullish break in the Relative Strength Index (RSI) continues to materialize.

With Dallas Fed President Richard Fisher scheduled to speak later today, hawkish comments from the Federal Open Market Committee (FOMC) voting member may prop up the dollar going into the final full week of March, and the greenback may trade on a firmer footing in the month ahead should we see a growing number of central bank officials show a greater willingness to normalize monetary policy sooner rather than later. 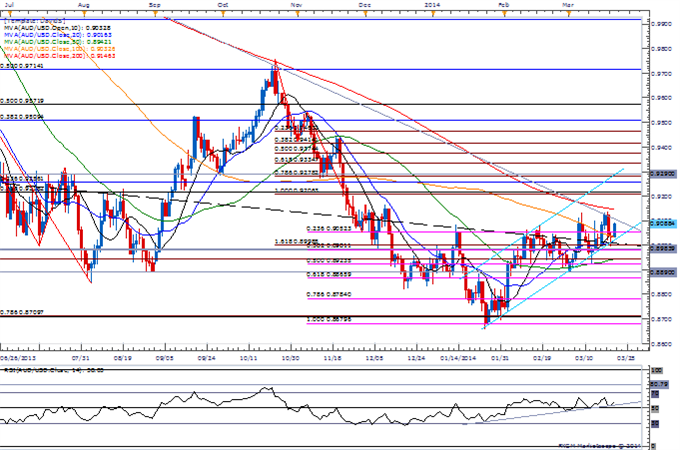 Three of the four components strengthened against the greenback, led by a 0.56 percent rally in the Australian dollar, but the AUDUSD remains at risk of carving a lower high as the pair appears to be limited by the downward trend dating back to April 2013.

At the same time, we will also keep a close eye on the 200-Day SMA (0.9146) as the AUDUSD showed a material decline the last time it approached the indicator, and the pair may struggle to retain the ascending channel carried over from the previous month as Reserve Bank of Australia Governor Glenn Stevens continues to favor a lower exchange rate.

Nevertheless, risk sentiment may play larger role in driving AUD price action next week amid the limited developments coming out of the $1T economy, while we may see the RBA toughen its verbal intervention in an effort to further assist with the rebalancing of the real economy.