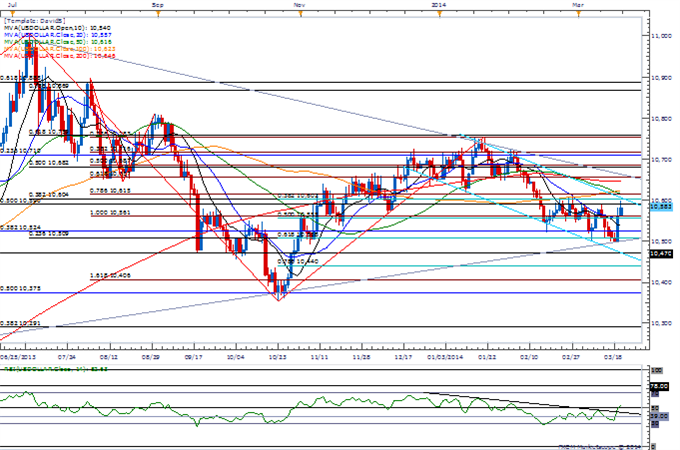 The Dow Jones-FXCM U.S. Dollar Index (Ticker: USDollar) continued to pare the decline from earlier this year following the fresh updates coming out of the Federal Open Market Committee(FOMC) meeting, and the topside break in the Relative Strength Index (RSI) certainly highlights a larger correction for the greenback as the central bank shows a greater willingness to start normalizing monetary policy in 2015.

The reserve currency may continue to benefit from the shift in the policy outlook as the Fed adopts an improved outlook for the U.S. economy, and a further pickup in interest rate expectations may generate a more bullish forecast for the greenback as the central bank sticks to its current pace in reducing the asset-purchase program.

Despite the bullish RSI signal, it looks as though the USDOLLAR will continue to face range-bound prices over the remainder of the week as it preserves the downward trending channel from earlier this year, and we will need to see a move back above former support (10,602-615) to favor the topside objectives as the greenback appears to be in a longer-term wedge/triangle formation.

Nevertheless, the dollar may face increased volatility in the days ahead as price approaches the apex of the wedge/triangle, and the fundamental developments coming out of the world’s largest economy may play a greater role in driving USD price action as the Fed adopts a ‘qualitative’ approach for monetary policy.

Just How Big of A Deal is This Recent EUR/USD Decline? 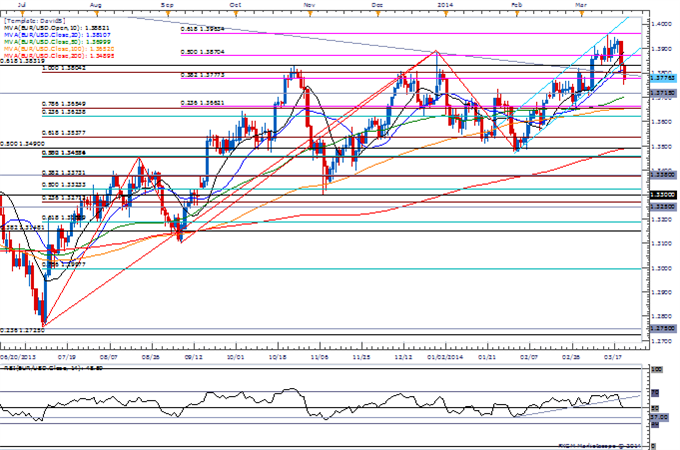 The greenback advanced across the board, led by a 0.40 percent decline in the Euro, and the EURUSD looks to have set a higher high in March as it fails to preserve the bullish trend carried over from the previous month.

The downside break in price and RSI certainly foreshadows a larger pullback for the EURUSD, and we will continue to watch the downside targets ahead of the next European Central Bank (ECB) interest rate decision on April 3 as the pair searches for a higher low.

However, a material shift in the ECB’s policy outlook may negate the bullish bias surrounding the single-currency as President Mario Draghi keeps the door open for additional monetary support, and the Governing Council may have little choice but to further embark on its easing cycle amid the persistent for disinflation.