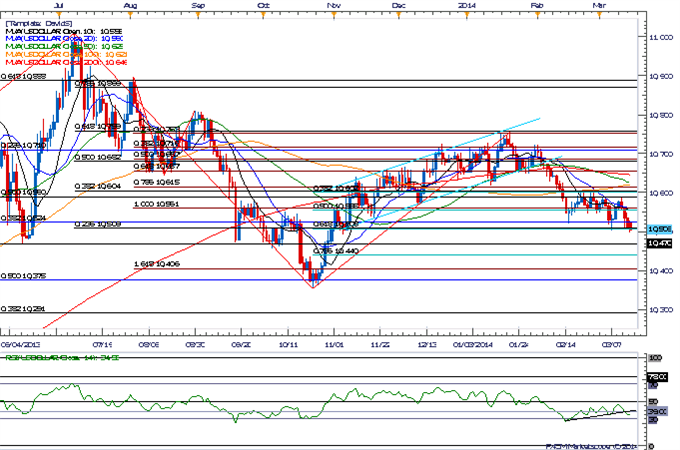 USDOLLAR Vulnerable Ahead of FOMC Meeting- 10, 470 in Sight

- AUDUSD Makes Another Run at 0.9100 Ahead of Reserve Bank of Australia (RBA) Minutes

The Dow Jones-FXCM U.S. Dollar Index (Ticker: USDollar) extended the decline from the previous week despite the uptick in U.S. Industrial Production, and the greenback may continue to pare the advance from back in October should the policy statement from the Federal Open Market Committee (FOMC) Meeting drag on interest rate expectations.

Indeed, the FOMC is widely expected to discuss another $10B reduction in its asset-purchase program, but we may see a key adjustment to the forward-guidance as a growing number of central bank officials now favor a ‘qualitative’ approach in managing monetary policy. A dovish twist in the Fed’s policy outlook may continue to generate a series of lower highs & lower lows in the greenback, while a greater willingness to normalize sooner rather than later could prompt a near-term reversal in the reserve currency.

Nevertheless, a close below 10,508-509 would bring the 10,470 pivot on our radar as it fails to preserve the monthly opening range, and the technical outlook certainly highlights the risk for a further decline in the reserve currency as the Relative Strength Index (RSI) fails to preserve the bullish trend carried over from the previous month. 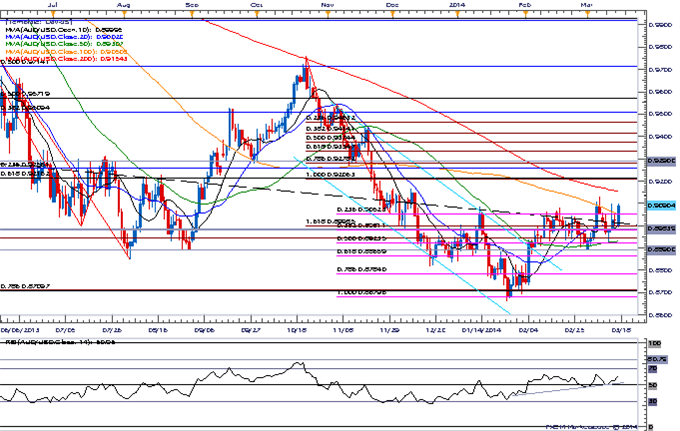 The Australian dollar led the advance against the greenback, with the higher-yielding currency gaining 0.71 percent, and the Reserve Bank of Australia (RBA) Minutes may prompt a further advance in the AUDUSD should the policy statement dampen bets for a rate cut.

Indeed, the positive developments coming out of the $1T economy has limited the downside risk for the exchange even though the RBA’s economic projections assume a further depreciation in the aussie-dollar, and the fresh batch of central bank rhetoric may spur a bullish reaction in the Australian dollar should the policy statement highlight a greater willingness to move away from the easing cycle.

We will continue to watch the closing prices as the AUDUSD struggles to hold above the 0.9100 handle, while Governor Glenn Stevens may look to toughen the verbal intervention in the local currency in an effort to further assist with the rebalancing of the real economy.