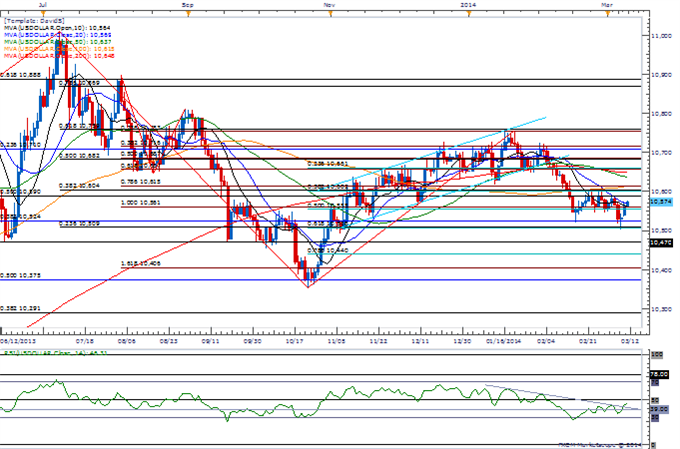 - USDOLLAR at Risk for Range-Bound Prices Ahead of Fed Meeting

The Dow Jones-FXCM U.S. Dollar Index (Ticker: USDollar) may face range-bound prices ahead of Federal Open Market Committee (FOMC) meeting on March 19 as the Relative Strength Index breaks out of the bearish momentum carried over from earlier this year.

Despite expectations of seeing another $10B reduction in the asset-purchase program, the technical outlook continues to highlight a bearish forecast for the USDOLLAR as it remains largely capped by former support (10,615). With that said, the greenback may continue to track sideways over the remainder of the week as market participants weigh the prospects of seeing the first rate hike in the U.S.

Nevertheless, a further deterioration in interest rate expectations may continue to spur lower highs and lower lows as the Fed sticks to its zero-interest rate policy (ZIRP), and the greenback may face additional headwinds over the near-term should the data coming out of the world’s largest economy raise the central bank’s scope to retain the highly accommodative policy stance for an extended period of time. 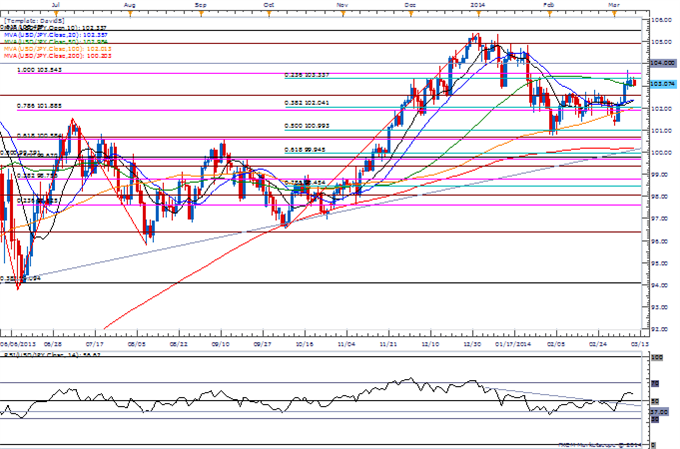 The greenback advanced against three of the four components, led by a 0.34 percent decline in the Australian dollar, while the Japanese Yen bucked the trend as market participants scaled back their appetite for risk.

Indeed, the USDJPY appears to be carving a lower high around the 103.50 region as it struggles to close above the 23.6 percent Fibonacci retracement around 103.30, and the low-yielding currency may strengthen further over the near-term as the Bank of Japan (BoJ) scales back its dovish tone for monetary policy.

It seems as though the BoJ may halt its easing cycle sooner rather than later as Governor Haruhiko Kuroda sees scope to achieve the 2 percent target for inflation as early as the end of FY 2014, and a further shift in the policy outlook may ultimately generate a larger decline in the USDJPY as market participants scale back bets of seeing a further expansion in the asset-purchase program.