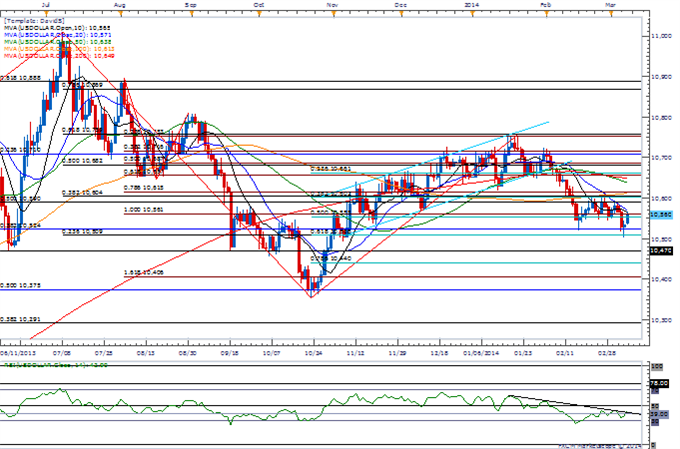 GBPUSD to Hold Support Ahead of BoE Testimony; Higher Low in Place?

The Dow Jones-FXCM U.S. Dollar Index (Ticker: USDollar) continued to pare the decline from earlier this month as the better-than-expected Non-Farm Payrolls (NFP) report heightens bets for another $10B taper at the Fed’s March 19 meeting, but the greenback may continue to consolidate ahead of the interest rate decision as market participants weigh the outlook for monetary policy.

Indeed, the dollar remains at risk of carving another lower high following the opening gap, and greenback may continue to give back the rebound from back in October (10,354) as the Federal Open Market Committee (FOMC) looks to preserve the zero-interest rate policy (ZIRP) for an extended period of time.

Nevertheless, Philadelphia Fed President Charles Plosser, who votes on the FOMC this year, argued that the central bank may have to take a more aggressive approach in scaling back its asset-purchase program as he sees the unemployment rate narrowing to 6.2 percent by the end of 2014, and a shift in the policy outlook may prop up the reserve currency should we see a growing number of Fed officials show a greater willingness to normalize monetary policy sooner rather than later.

With that said, a topside break in the Relative Strength Index (RSI) may highlight range-bound prices for the days ahead, but the greenback may face additional headwinds over the near-term should the fundamental developments coming out of the world’s largest economy dampen the outlook for growth and inflation. 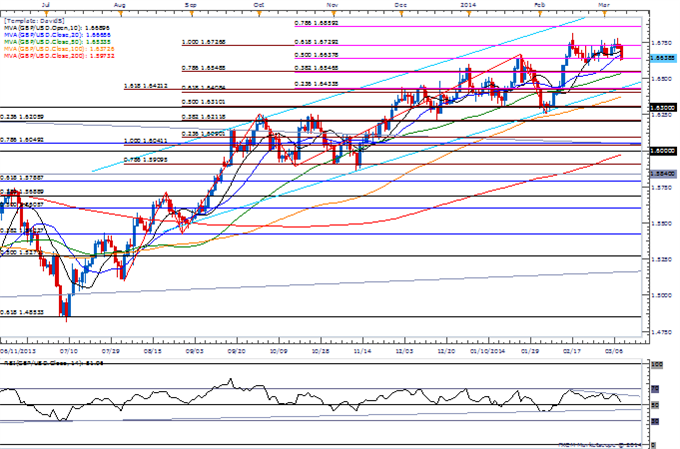 Two of the four components weakened against the greenback, led by a 0.42 percent decline in the British Pound, but the GBPUSD may continue to track sideways ahead of the Bank of England (BoE) testimony scheduled for tomorrow as the central bank prepares U.K. households for an imminent rise in the benchmark interest rate.

Indeed, the fresh batch of central bank rhetoric may prop up the British Pound as BoE Governor Mark Carney sees a faster recovery in 2014, and the Monetary Policy Committee (MPC) may look to shift gears later this year or even in early 2015 amid the growing threat of an asset-bubble.

In turn, the GBPUSD could be carving another higher-low above the 1.6600 handle, and the pair may make a more meaningful run at the 1.6850-60 region in the coming days should the BoE turn increasingly upbeat towards the U.K. economy.