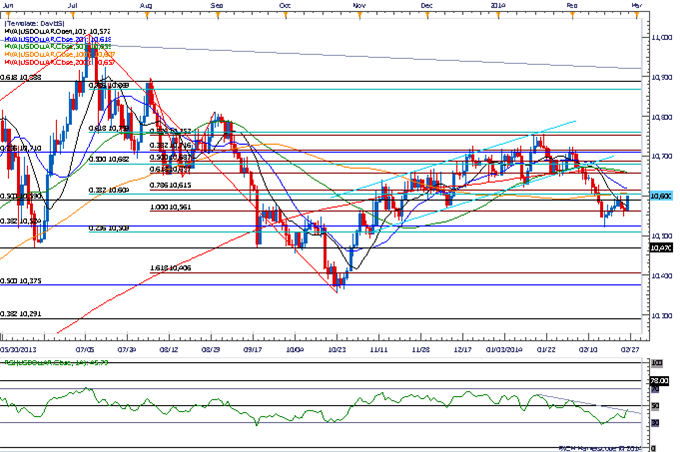 The Dow Jones-FXCM U.S. Dollar Index (Ticker: USDollar) made another run at former support (10,615) following the better-than-expected New Home Sales report, and the near-term rebound may generate a bullish forecast for March should the Relative Strength Index (RSI) break out of the bearish momentum.

Despite the risk of seeing a further delay in the Fed’s exit strategy, expectations for another $10B reduction in the asset-purchase program may prop up the dollar in the month ahead, but the technical outlook may continue to favor the downside targets for the reserve currency as it still appears to be carving a lower high.

With that said, the dollar may continue to mark a series of lower highs paired with lower lows as long as the RSI retains the downward trend with price holding below former support, and the remainder of the Humphrey-Hawkins Testimony may provide more clarity for near-term price action as market participants weigh the outlook for monetary policy. 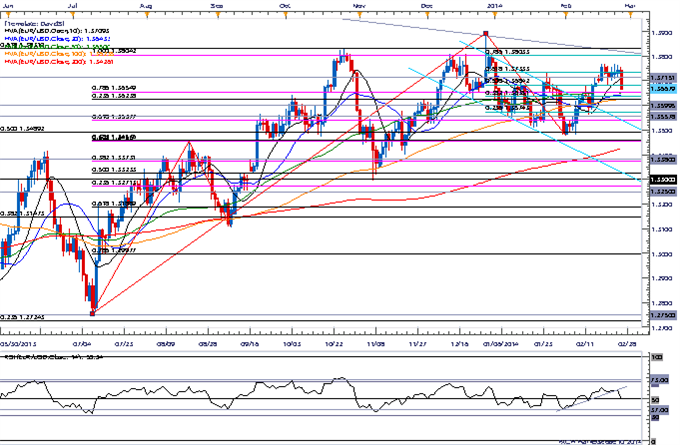 The dollar rallied across the board, led by a 0.55 percent decline in the Euro, and the single currency may face additional headwinds over the near-term as market participants anticipate the European Central Bank (ECB) to further embark on its easing cycle later this year.

Indeed, there’s limited expectations of seeing the ECB implement more non-standard measures at the March 6 meeting as President Mario Draghi talks down the risk for deflation, but the updated forecasts laid out by the central bank may drag on the Euro should the Governing Council see a greater risk of undershooting the 2 percent target for price growth.

Moreover, the technical forecast could highlight a major turn in the EURUSD as it appears to have carved lower high around 13770, and the single currency may face fresh lows over the near-term as the fundamental outlook for the euro-area remains weak.