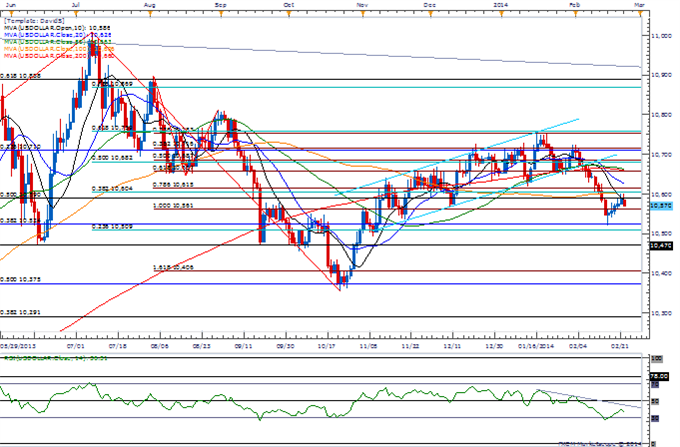 - USDOLLAR Remains at Risk of Lower-High Amid Bearish RSI Momentum

The Dow Jones-FXCM U.S. Dollar Index (Ticker: USDollar) continues to hold below former support (10,615) amid the weakening outlook for the world’s largest economy, and the greenback remains at risk of carving a lower high ahead of the Federal Open Market Committee (FOMC) Meeting on March 19 as the recent slowdown in economic activity drags on the interest rate outlook.

The recent rebound in the USD appears to be a mere correction as the Relative Strength Index (RSI) preserves the bearish momentum from the previous month, and the dollar outlook may turn increasingly bearish over the coming days should we see a lower-high take shape during the last full-week of February.

With that said, we continue to favor ‘selling bounces’ in the USDOLLAR as it carves a new series of lower highs paired with lower lows, and a further shift in interest rate expectations may spur a larger decline in the reserve currency as market participants see the Fed taking a more delayed approach in normalizing monetary policy. 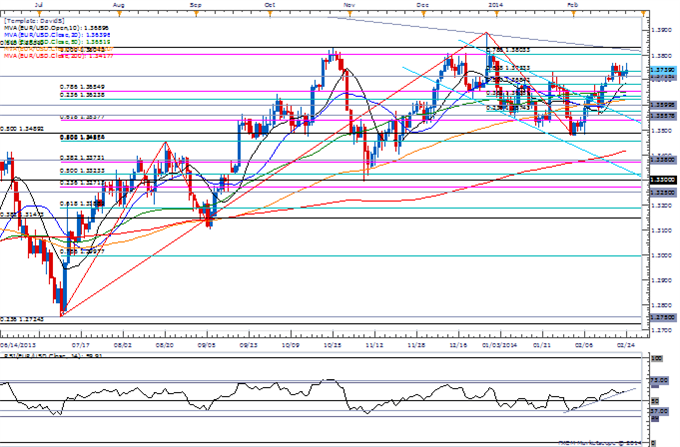 Three of the four components advanced against the greenback, led by a 0.63 percent rally in the Australian dollar, while the Euro lagged behind as European Central Bank (ECB) President Mario Draghi reiterated that the Governing Council will act if needed as it sticks to its one and only mandate to ensure price stability.

Indeed, there’s bets that the ECB will further embark on its easing cycle at the March 6 meeting in order to further insulate the monetary union, but the central bank may largely rely on forward-guidance to manage market expectations as the board is expected to present its 2016 forecast for growth and inflation.

Should the updated assessment highlight a greater willingness to implement more non-standard measures, a more dovish shift in the policy outlook may generate fresh lows in the EURUSD, and we will keep a close eye on the RSI as it appears to be threatening the bullish momentum carried over from the previous month.