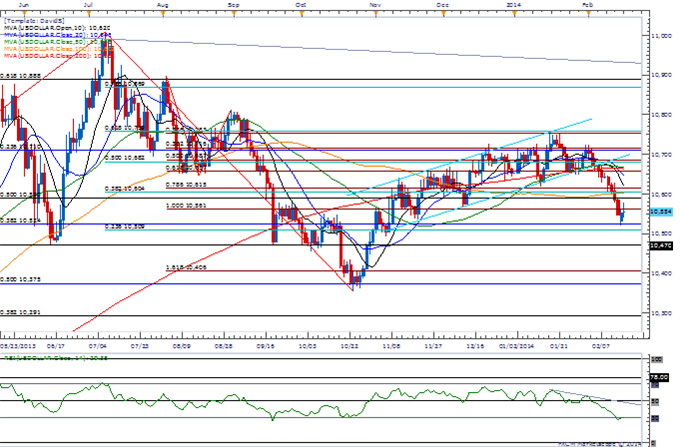 USDJPY at Risk for Larger Correction on Dovish FOMC Minutes

- USDOLLAR Volatility to Thin Ahead of FOMC Minutes

The Dow Jones-FXCM U.S. Dollar Index (Ticker: USDollar) pared the advance to10,579 following the slew of disappointing data coming out of the world’s largest economy, and the greenback may face additional headwinds over the near-term as seasonal factors continue to dampen the outlook for growth and inflation.

Indeed, another round of dismal developments may spur a larger decline in the reserve currency as the recent slowdown in economic activity dampens the prospects for a rate hike, and a more meaningful shift in the policy outlook may heighten the bearish sentiment surrounding the dollar as the Fed continues to heavily rely on forward-guidance to balance the risks surrounding region.

With that said, USD volatility may thin ahead of the Federal Open Market Committee (FOMC) Minutes as market participants weigh the outlook for monetary policy, but the fresh batch of central bank may spur a more meaningful rebound in the dollar should we see a growing number of Fed officials show a greater willingness to normalize monetary policy sooner rather than later. With that said, a more hawkish tone from the FOMC may help to limit the downside risks for the dollar as the central bank remains poised to discuss another $10B at the March 19 meeting, and the dollar may face a more meaningful rebound in the days ahead as it appears to be finding support ahead of the 10,500 handle. 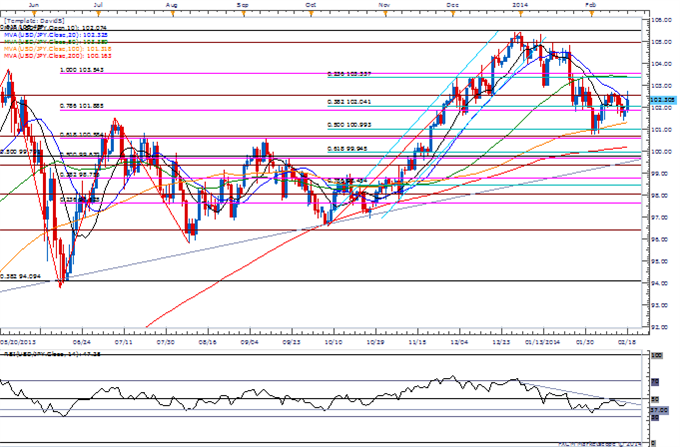 Two of the four components weakened against the greenback, led by a 0.39 percent decline in the Japanese Yen, and the USDJPY may continue to retrace the decline from earlier this year as the Bank of Japan (BoJ) expands its lending program to JPY 7 trillion in an effort to further insulate the real economy.

In light of the new measure, it seems as though BoJ Governor Haruhiko Kuroda will continue to delay a further increase in its asset-purchase program as the central bank head largely retains his pledge to achieve the 2 percent inflation target by 2015, and the USDJPY remains at risk for a larger correction should the Federal Reserve take a more aggressive approach in talking down bets for a rate hike.

In turn, we will keep a close eye on the Relative Strength Index (RSI) as it threatens the bearish trend from earlier this year, and the pair remains at risk of testing the upward trendline dating back to early 2013 as it continues to carve a series of lower highs paired with lower lows.