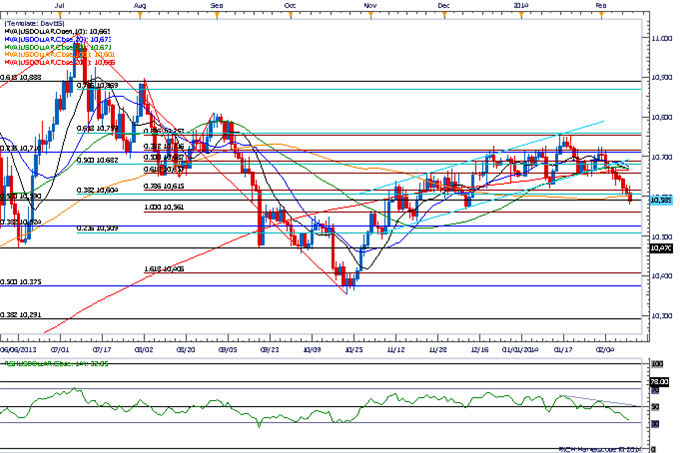 USDOLLAR Coming Up Against Key Support- Lower High in Place for AUD?

The Dow Jones-FXCM U.S. Dollar Index (Ticker: USDollar) outlook in turning increasingly bearish as it approaches the December low (10,565), and the near-term decline may gather pace ahead of the next Fed meeting on March 19 as the dismal developments coming out of the world’s largest economy dampens the central bank’s scope to normalize monetary policy sooner rather than later.

The recent batch of dismal U.S. data may alter the policy outlook as it highlights a weakening outlook for growth and inflation, but the Federal Open Market Committee (FOMC) may continue to implement a $10B reduction in its asset-purchase program as a growing number of central bank officials scale back their dovish tone for monetary policy. As a result, it seems as though we will need to see a further deterioration in U.S. data beyond the winter months for the Fed to deviate from its current path, and the central bank may bring Quantitative Easing (QE) to an end later this year as the cost of the non-standard measure now outweighs the benefit for the economy.

In turn, the Fed’s policy outlook may continue to limit the downside risk for the dollar, and we would need to see a potential turn in the dollar ahead of interim support to retain a constructive outlook for the greenback. 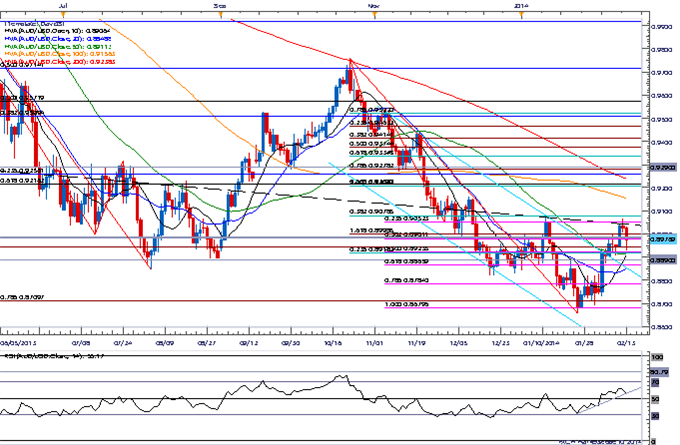 Three of the four components advanced against the greenback, led by a 0.58 percent rally in the Euro, while the Australian dollar bucked the trend as the region’s dismal Employment report weakens the fundamental outlook for the $1T economy.

Indeed, the AUDUSD may have set a lower high in February as the Relative Strength Index (RSI) threatens the bullish trend carried over from the previous month, and it seems as though the near-term correction is coming to an end should the oscillator show a meaningful break to the downside.

With that said, the Reserve Bank of Australia (RBA) may have little choice but to further reduce the benchmark interest rate in 2014, and we will revert back to ‘selling bounces’ in the aussie-dollar as the bearish break in the RSI materializes.