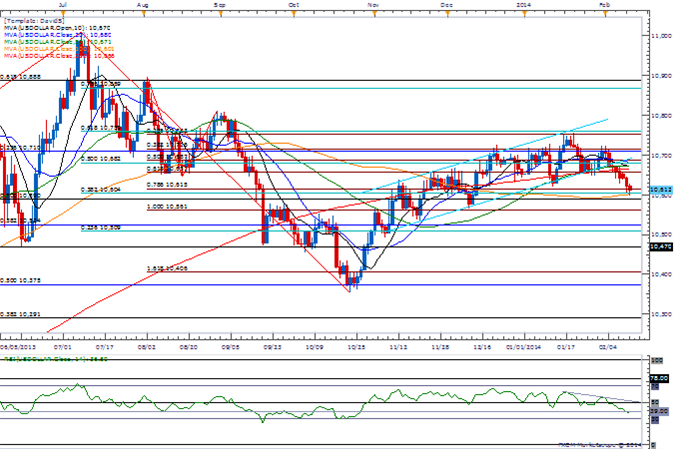 The Dow Jones-FXCM U.S. Dollar Index (Ticker: USDollar) marked the longest string of declines since 2011 following the Humphrey-Hawkins Testimony, and the greenback may weaken further over the remainder of the week as the bearish RSI momentum gathers pace.

Indeed, the dollar may have set a longer-term lower high as it fails to retrace the decline from September, and a dip below the December low (10,565) would instill a more bearish outlook for the greenback as it struggles to find support. With that said, the fundamental developments coming out of the U.S. economy may continue to dampen the outlook for the dollar should cyclical/transitory effects produce a further slowdown in private-sector activity, but the Federal Open Market Committee (FOMC) may have little choice but to raise rates sooner rather than later as a growing number of central bank officials anticipate a more robust recovery this year.

In turn, we will continue to watch the downside targets ahead of the Fed’s March 19 meeting, and the dollar may face further headwinds over the near-term should Congress struggle to pass through the budget deal, which would remove the debt limit till March 2015. 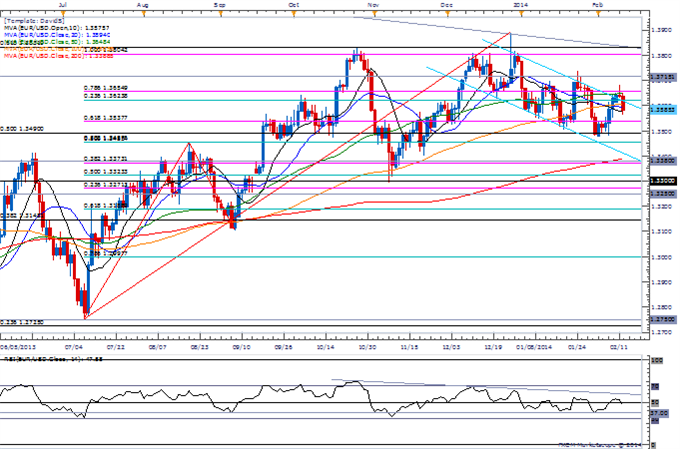 Two of the four components weakened against the greenback, led by a 0.38 percent in the Euro, and the single currency may face fresh lows in the coming days as the European Central Bank (ECB) shows a greater willingness to implement negative-deposit rates across the monetary union.

Indeed, we still favor ‘selling bounces’ in the EURUSD as price and RSI retains the bearish trend carried over from the previous month, and the pair may continue to track lower ahead of the next ECB meeting on March 6 as market participants see the central bank taking additional steps to shore up the ailing economy.

In turn, we will continue to look for a series of lower highs paired with lower lows in the EURUSD, and the bearish trend may gather pace throughout 2014 as the region faces a growth threat for disinflation.