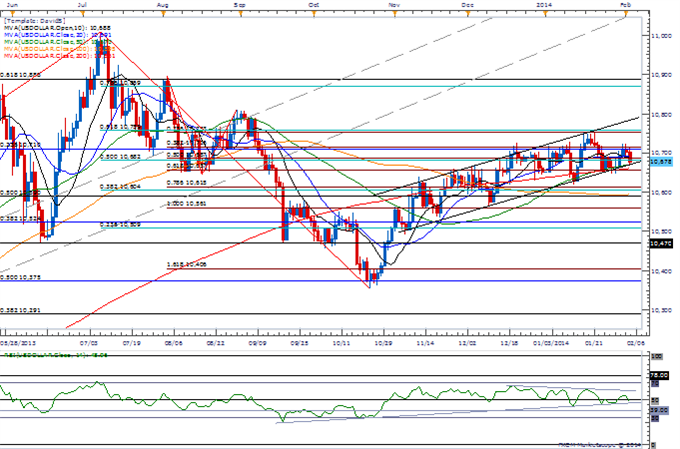 The Dow Jones-FXCM U.S. Dollar Index (Ticker: USDollar) appears to have carved another higher low as it comes off of trendline support, and the greenback may continue to track higher over the remainder of the month as the Federal Reserve is expected to deliver another $10B taper at the March 19 meeting.

Indeed, Richmond Fed President Jeffrey Lacker expects a further reduction in the asset-purchase program at future meetings amid the ongoing improvement in the labor market, but went onto say that the FOMC is unlikely to rate the benchmark interest rate when the 6.5 percent unemployment threshold is breached as the central bank gauges the spillover effects on the global economy.

As discussed in DailyFX on Demand, another dismal Non-Farm Payrolls print may undermine the bullish sentiment surrounding the greenback, and it seems as though the fundamental developments coming out of the world’s largest economy may have a greater impact in driving USD price action in 2014 as the Fed moves away from its easing cycle.

At the same time, the debt limit debate in Congress may also serve as a near-term risk for the greenback should U.S. policy makers struggle to meet on common ground, and the fiscal drag may prompt the FOMC to keep rates on hold till 2015 as it dampens the outlook for growth and inflation. 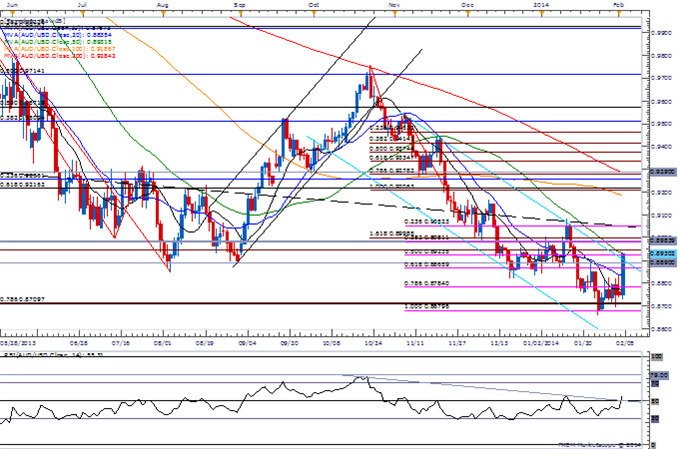 Three of the four components four components weakened against the greenback, led by a 0.65 percent decline in the Japanese Yen, while the Australian dollar bucked the trend as the Reserve Bank of Australia (RBA) scaled back its verbal intervention on the higher-yielding currency.

Nevertheless, it seems as though Governor Glenn Stevens has yet to scrap the easing cycle as the central bank sees unemployment rising in the $1T economy, and we may see the RBA revert back to a more dovish tone for monetary policy should the threat of an asset-bubble fail to materialize.

With that said, the AUDUSD should maintain the long-term bearish trend amid the deviation in the policy outlook, and we will continue to look for a lower high in the coming days as the near-term correction remains in play.