The Dow Jones-FXCM U.S. Dollar Index (Ticker: USDollar) appears to be a near-term top amid the bearish divergence in the Relative Strength Index, but the fundamental developments coming out of the world’s largest economy may limit the downside for the greenback as the Federal Reserve moves away from its easing cycle.

Indeed, the 238K rise in ADP Employment bodes well for Non-Farm Payrolls as the U.S. is expected to add another 195K jobs in December, and the ongoing improvement in the labor market may encourage the 2014 FOMC to take a more aggressive approach in normalizing monetary as the economic recovery gradually gathers pace.

However, the growing threats for disinflation may become a growing concern for the central bank as Fed officials see price growth holding below the 2 percent target over the policy horizon, and a further delay in the Fed’s exit may generate a near-term correction in the USDOLLAR as market participants weigh the policy outlook. 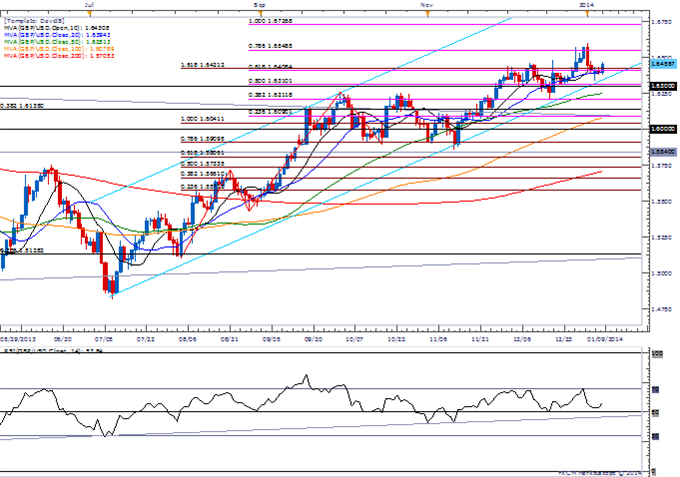 Three of the four components weakened against the dollar, led by a 0.24 percent decline in the Japanese Yen, while the British Pound bucked the trend, with the GBPUSD advancing 0.34 percent ahead of the Bank of England (BoE) interest rate decision.

The BoE is widely expected to retain its current policy in January as the central bank winds down the Funding for Lending Scheme for households, and the Monetary Policy Committee may refrain from releasing a policy statement as the group preserves its forward-guidance for the U.K.

Nevertheless, the British Pound should continue to benefit from the policy outlook as the BoE looks to implement their exit strategy ahead of schedule, and the sterling may continue to carve a series of higher highs paired with higher lows as it preserves the upward trend dating back to July.