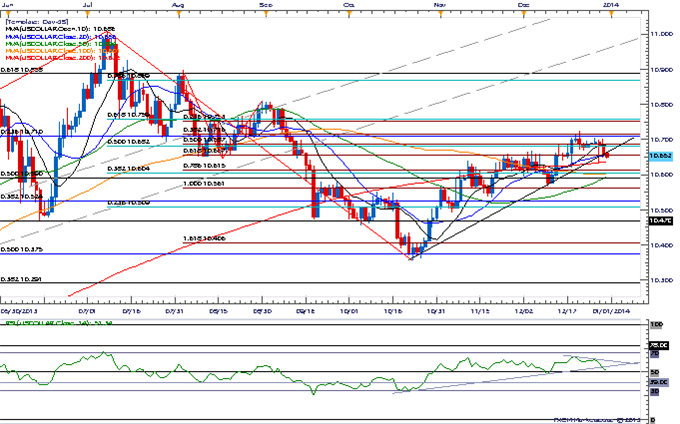 The technical outlook for the Dow Jones-FXCM U.S. Dollar Index (Ticker: USDollar) is turning increasingly bearish as it struggles to retain the bullish trend from earlier this year.

Indeed, thin market conditions may have limited the market reaction to the unexpected uptick in U.S. Consumer Confidence, but the dollar may continue to give back the advance from back in October as the dovish twist to the Fed’s forward-guidance limits the scope of seeing another taper at the January 29 meeting.

Despite the ongoing improvement in the labor market, the heightening threat for disinflation may becoming a growing argument for the Federal Open Market Committee (FOMC) to implement a wait-and-see approach as price growth is expected to hold below the 2 percent target over the policy horizon. In turn, the dollar may start 2014 on a weaker tone, but positive developments coming out of the U.S. economy should limit the downside for the greenback as it raises the outlook for growth and inflation. 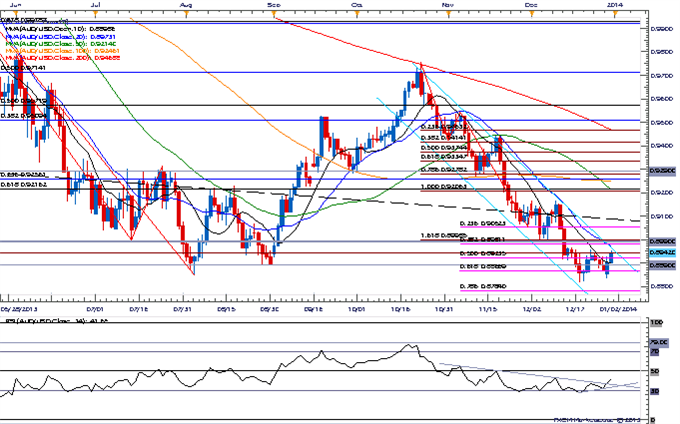 The Australian dollar continued to led the advance against the greenback, with the AUDUSD climbing another 0.45 percent, and the pair looks poised for a run at 0.8990 to 0.9000 (38.2 percent Fibonacci expansion) as the near-term correction gathers pace.

The rebound may offer near-term opportunities to buy the Australian dollar, but the dovish tone held by the Reserve Bank of Australia (RBA) may continue to limit the upside for the higher-yielding currency as the region continues to face a protracted recovery.

With that said, we will look for the AUDUSD to carve out a lower high in January, and the bearish sentiment surrounding the Australian dollar may gather pace in 2014 should Governor Glenn Stevens take a more aggressive approach in talking-down the local currency.