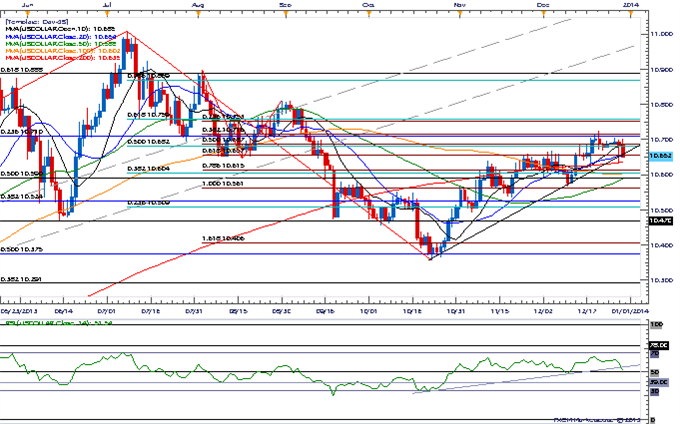 The Dow Jones-FXCM U.S. Dollar Index (Ticker: USDollar) extended the decline from the previous week as the data prints fell short of market expectations, and the greenback may weaken further going into the New Year as the Relative Strength Index struggles to maintain the bullish momentum carried over from back in October.

If the bearish break in the RSI continues to take shape, price should follow as it threatens trendline support, and a close below 10,657 (61.8 expansion) would highlight the downside targets for the USDOLLAR as it fails to retrace the decline from back in September.

Nevertheless, with Fed officials scheduled to speak at the American Economic Association’s (AEA) 2014 Annual Meeting later this week, the fresh batch of central bank rhetoric may help limit the downside risk for the greenback should the group adopt a less dovish tone for monetary policy, but the Federal Open Market Committee (FOMC) may stick to the sidelines at the January 29 meeting amid the growing threats for disinflation. 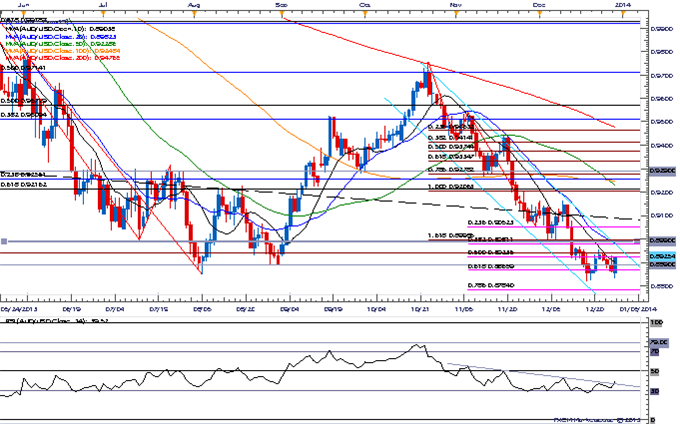 All four components rallied against the greenback, led by a 0.61 percent advance in the Australian dollar, and the AUDUSD may face a larger correction in the coming days as it threatens the bearish momentum dating back to November.

With that said, a lower high may take shape in January as the pair carves a lower low ahead of 2014, and the long-term bearish trend should continue to take shape next year as the Reserve Bank of Australia (RBA) retains a dovish tone for monetary policy.

In turn, former support around 0.8990 to 0.9000 (38.2 percent Fibonacci expansion) will be largely in focus during the rebound, and we will continue to sell bounces in the exchange rate as the fundamentals and technicals favor the downside.