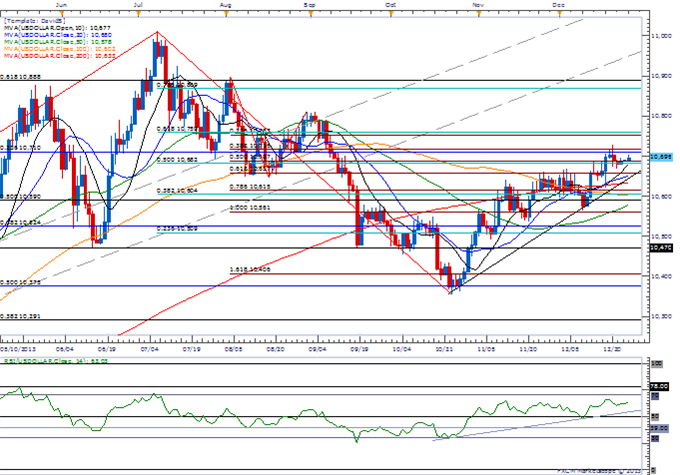 The Dow Jones-FXCM U.S. Dollar Index (Ticker: USDollar) continued to pare the decline from 10,727 despite the mixed Jobless Claims print, and the greenback may track higher over the remainder of the year amid the shift in the Fed’s policy outlook.

With Janet Yellen’s confirmation hearing quickly approaching (January 6), the composition of the 2014 Federal Open Market Committee (FOMC) will be a large focus as a handful of Fed Governors (Sarah Bloom Raskin, Jeremy Stein, and Jerome Powell) are expected to depart next year, and the shuffle may limit the scope of seeing another taper at the January 29 meeting as the board implements a more dovish twist on its forward-guidance.

Nevertheless, we will maintain a bullish outlook for the USDOLLAR as it continues to carve a higher low above 10,657 (61.8 percent Fibonacci expansion), but greenback may face produce choppy to whipsaw-like price action over the remainder of the month as market participation remains thin. 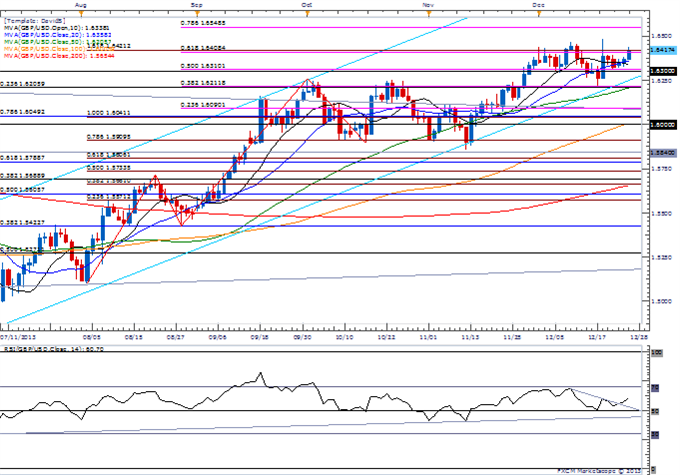 The greenback rallied against two of the four components, led by a 0.45 percent decline in the Australian dollar, while the British Pound continued to buck the trend, with the GBPUSD breaking out of the narrow range from the holiday trade.

The technical outlook continues to favor the topside targets for the sterling as the pair comes off of trendline support, and it seems as though it will only be a matter of time before the pound-dollar clears the 1.6500 handle amid the bullish break in the Relative Strength Index (RSI).

As a result, we will continue to implement a ‘buy the dip’ strategy for the GBPUSD, and the bullish sentiment surrounding the sterling should gather pace next year as the Bank of England (BoE) looks to normalize monetary policy ahead of schedule.