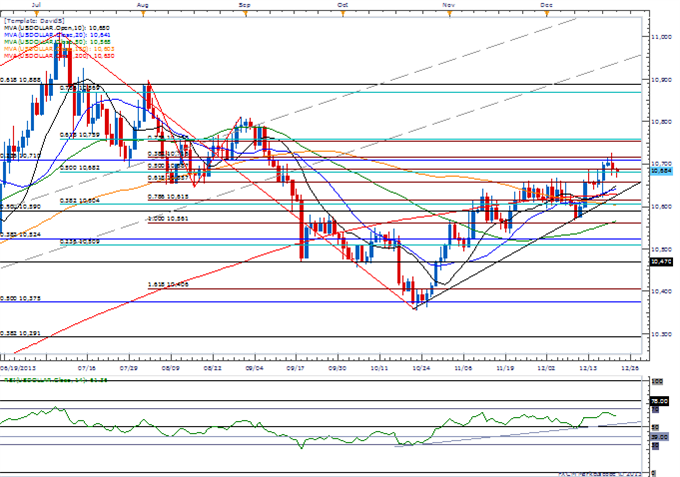 USDOLLAR Searching for Higher Low- EUR Coiling Up for 1.3800?

- Bullish EURUSD Trend Remains in Focus- Retest of 1.3800 in View

The Dow Jones-FXCM U.S. Dollar Index (Ticker: USDollar) pared the decline to 10,669 as Personal Spending in the world’s largest economy increased another 0.5 percent in November, and the reserve currency appears to be searching for a higher low as it retains the bullish trend carried over from the end of October.

At the same time, Richmond Fed President Jeffery Lacker argued that the Federal Open Market Committee (FOMC) may continue to reduce the asset-purchase program by $10B as growth prospects improve, but the heightening threat for disinflation may raise the central bank’s scope to retain its highly accommodative policy stance for an extended period of time as price growth is expected to hold below the 2 percent target over the policy horizon.

As a result, the FOMC under Janet Yellen may implement a wait-and-see approach throughout the first-quarter of 2014, and the bullish sentiment underlying the USD may come under pressure should the central bank further highlight the downside risks for price growth. 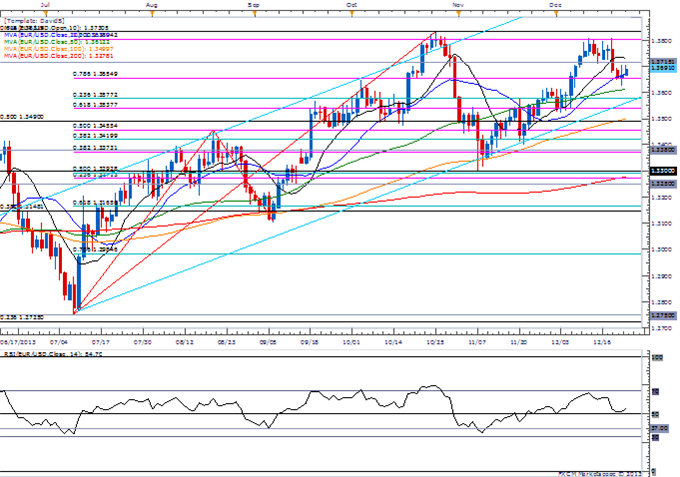 Three of the four components strengthened against the greenback, led by a 0.13 percent advance in the Euro, and the EURUSD appears to be coiling up for another run at the 1.3800 handle as it retains the bullish structure from earlier this year.

The ascending channel should get carried into 2014 as the European Central Bank (ECB) looks poised to retain its current policy at the January 9 meeting, and the single currency may continue to benefit from the more neutral tone struck by President Mario Draghi as the central bank refrains from further embarking on its easing cycle.

However, the ongoing turmoil in the periphery countries may continue to drag on the real economy as they struggle to get their house in order, and the ECB may have little choice but to offer additional monetary support as the region faces a slowing recovery.