The Dow Jones-FXCM U.S. Dollar Index (Ticker: USDollar) pushed to a fresh monthly high of 10,726 as the final 3Q GDP report showed the world’s largest economy at the fastest pace since the last three-months of 2011, and the greenback may continue to retrace the decline from back in July as the stronger recovery raises the Fed’s scope to move away from its easing cycle.

Despite the upward revision in the growth rate, the Core Personal Consumption Expenditure (PCE) – the Fed’s preferred gauge for inflation – unexpectedly narrowed to an annualized 1.4 percent from 1.5 percent, and the growing threat for disinflation may limit the scope of seeing another taper in the first-quarter of 2014 as the central bank retains a cautious tone for monetary policy.

Nevertheless, it seems as though we will see a move towards 10,753 (23.6 percent expansion) to 10,759 (61.8 percent retracement) as the bullish trend continues to take shape, and we may see a further advance in the days ahead should the Relative Strength Index pushes into overbought territory. 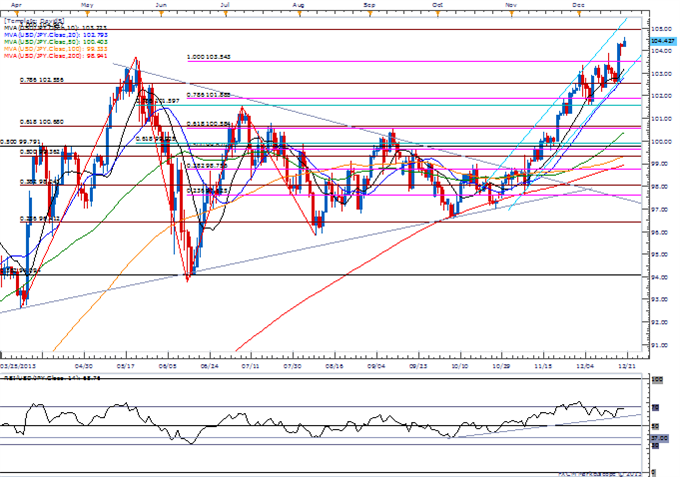 The greenback strengthened against two of the four components, led by a 0.19 percent decline in the Japanese Yen, and the USDJPY may continue to mark fresh over the remainder of the year as the ascending channel continues to take shape.

However, it seems as though the Bank of Japan (BoJ) will sit pat until Prime Minister Shinzo Abe implements the ‘Third Arrow’ stimulus package as Governor Haruhiko Kuroda maintains his pledge to achieve the 2 percent inflation target by 2015, and the neutral tone may help to limit the downside risks for the Yen as the central bank warns that the pace of its bond-buying program will not change too much in 2014.

In turn, we’ll continue to trade the bullish trend as the post-FOMC reaction gathers pace, but we may see a near-term correction before the end of the year as the RSI struggles to push back above 70.