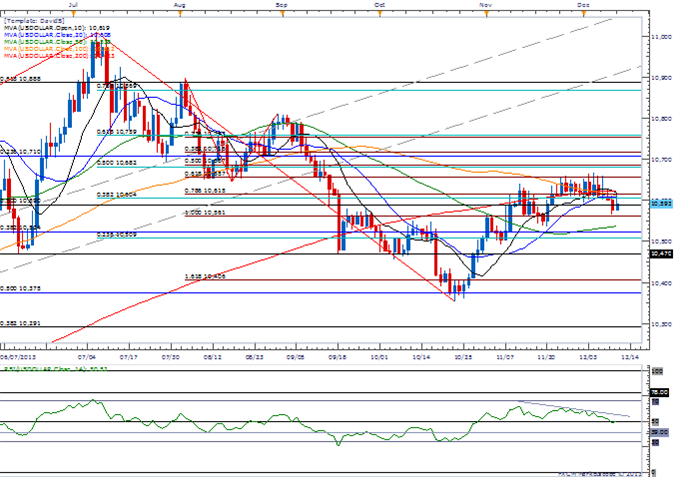 The Dow Jones-FXCM U.S. Dollar Index (Ticker: USDollar) pared the losses from the previous week as U.S. policy makers inch closer to a budget deal, and a near-term resolution may help to limit the downside risks for the greenback as it gives the Fed greater scope to taper the asset-purchase program at the December meeting.

However, the greenback retains at risk of facing a larger decline as it continues to carve a series of lower highs paired with lower lows, and the technical outlook continues to favor further USD weakness as the downward trend in the Relative Strength Index tapes shape.

As a result, it we will need to see at least a small taper next week to scale back the bearish outlook for the dollar, and we favor selling bounces in the reserve currency ahead of the Federal Open Market Committee (FOMC) as soft support around the 10,615 (78.6 percent Fibonacci expansion) now appears to be acting as resistance.

Two of the four components weakened against the greenback, led by a 0.95 percent decline in the Australian dollar, and the higher-yielding currency may weaken further over the next 24-hours of trade should the region’s Employment Report fall short of market expectations for the fifth consecutive month.

In light of the slowing recovery, the Reserve Bank of Australia (RBA) Minutes due out on December 16 may show a greater willingness to further embark on the easing cycle in 2014, while Governor Glenn Stevens may increase his efforts to weaken the local currency in an effort to further assist with the rebalancing of the real economy.

In turn, it seems as though the bearish trend will continue to take shape throughout the remainder of the year, and the AUDUSD may press to fresh lows in the days ahead should the RBA sounds more dovish this time around.