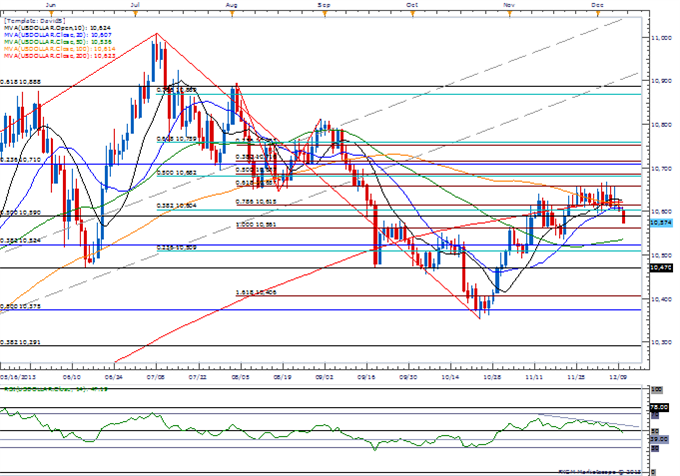 The near-term outlook for the Dow Jones-FXCM U.S. Dollar Index (Ticker: USDollar) is turning increasingly bearish as it fails to hold the range-bound price action carried over from the previous month.

It seems as though the greenback has carved a lower high in December amid the divergence in the Relative Strength Index, and the reserve currency may continue to give back the rebound back in October as it looks poised to mark a lower low over the near-term.

With the FOMC’s December 17-18 meeting coming into focus, the recent price action suggests market participants are scaling back bets of seeing the central bank reduce its asset-purchase program, but the greenback may face additional headwinds prior to the rate decision as Congress struggles to reach a budget deal. In turn, the uncertainties surrounding the monetary/fiscal outlook may continue to dampen the appeal of the greenback, and the dollar may press to fresh lows in the coming days as the rebound from 10,354 appears to have been a mere correction. 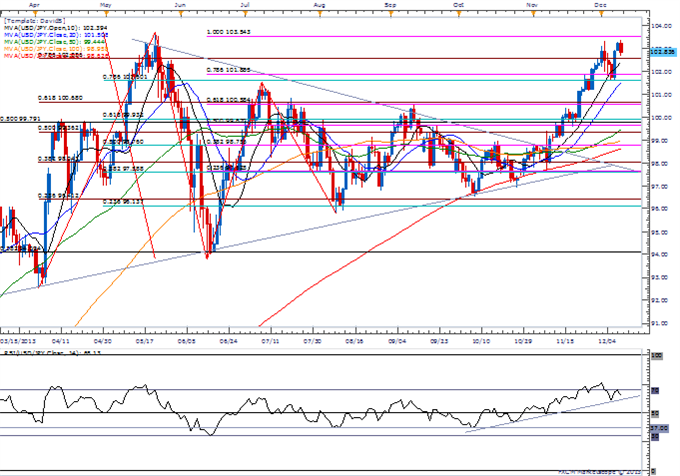 The greenback weakened across the board, led by a 0.48 percent rally in the Japanese Yen, and the low-yielding currency may continue to appreciate over the next 24-hours of trading as market sentiment falters.

From a technical standpoint, the USDJPY looks poised for a near-term correction as it carves a higher high just below the 100.0 percent Fibonacci expansion around 103.50-60, and we will wait for a downside break in the RSI as it maintains the bullish trend from back in October.

Despite speculation for a December taper, it seems as though the Bank of Japan (BoJ) will stick to the sidelines until Prime Minister Shinzo Abe unveils the ‘Third Arrow’ stimulus package, and the Yen may benefit from the policy outlook as central bank Governor Haruhiko Kuroda maintains his pledge to achieve the 2 percent target for inflation by 2015.