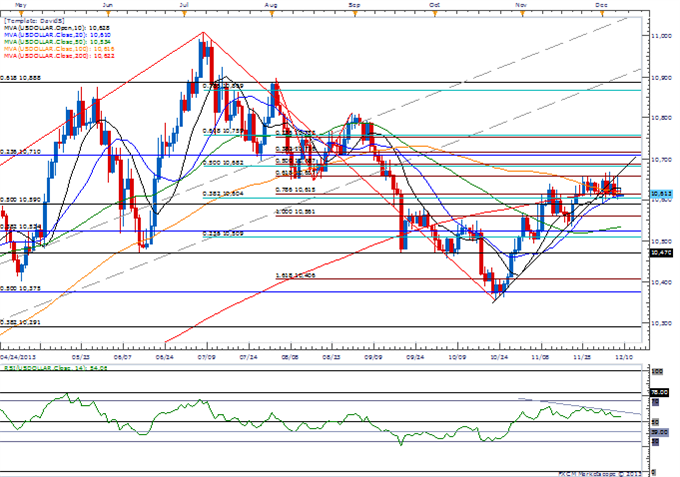 Despite the 203K rise in Non-Farm Payrolls, the Dow Jones-FXCM U.S. Dollar Index (Ticker: USDollar) continues to threaten near-term support (10,590- 50.0 percent Fibonacci retracement) amid the ongoing threat for disinflation, and the greenback may face additional headwinds over the near-term should Congress fail to reach a budget deal ahead of 2014.

Beyond the Fed’s forward-guidance for unemployment, the ongoing weakness in the Personal Consumption Expenditure (PCE) index – the Fed’s preferred gauge for inflation – may encourage the Federal Open Market Committee (FOMC) to maintain its highly accommodative policy stance in December meeting, and the central bank may look to further delay its exit strategy in 2014 as the fiscal drag continues to dampen the outlook for growth and inflation.

In turn, the bearish divergence in the Relative Strength Index may continue to highlight a near-term top on the dollar, and the greenback may weaken further over the remainder of the year as it appears to be carving a lower high around former support. 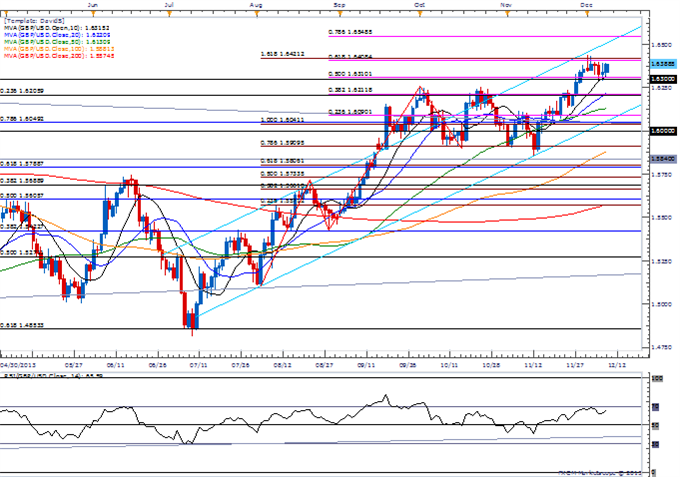 Two of the four components strengthened against the greenback, led by a 0.26 percent rally in the British Pound, and the GBPUSD may continue to press higher over the near-term as it preserves the bullish trend dating back to July.

With Bank of England (BoE) Governor Mark Carney Scheduled to speak at 17:15 GMT, hawkish comments from the central bank head may spur a bullish reaction in the pound-dollar as the central bank moves away from its easing cycle, and the sterling may continue to outperform in 2014 as market participants see the Monetary Policy Committee implementing its exit strategy ahead of schedule.

In turn, the GBPUSD appears to be carving a higher low around the 1.6300 region, and we will continue to watch the topside targets amid the shift in the policy outlook.