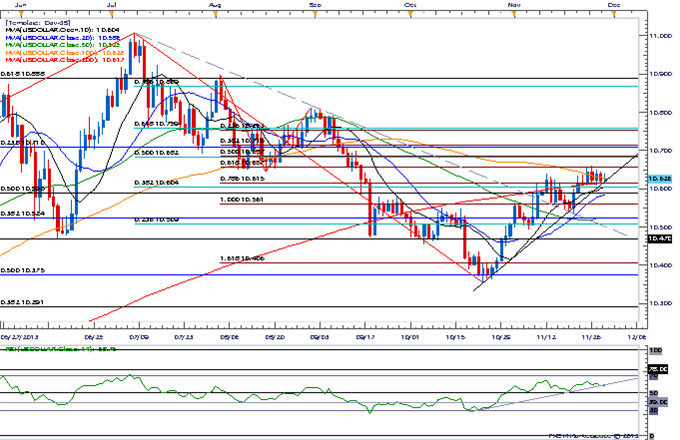 The technical outlook for the Dow Jones-FXCM U.S. Dollar Index (Ticker: USDollar) is turning increasingly bearish as the greenback threatens the upward trend carried over from the previous month.

Indeed, the dollar appears to be at a key turning point amid the growing divergence in the Relative Strength Index (RSI), and the greenback may fail to maintain the range-bound price action in the week ahead should Fed officials show a greater willingness to carry its highly accommodative policy stance into 2014.

Nevertheless, with the highly anticipated Non-Farm Payrolls report on tap next week, a positive print may heighten bets for a small taper at the Federal Open Market Committee’s (FOMC) December 17-18 meeting, and the policy outlook may continue to limit the downside for the greenback amid the ongoing discussion at the central bank to scale back the asset-purchase program. 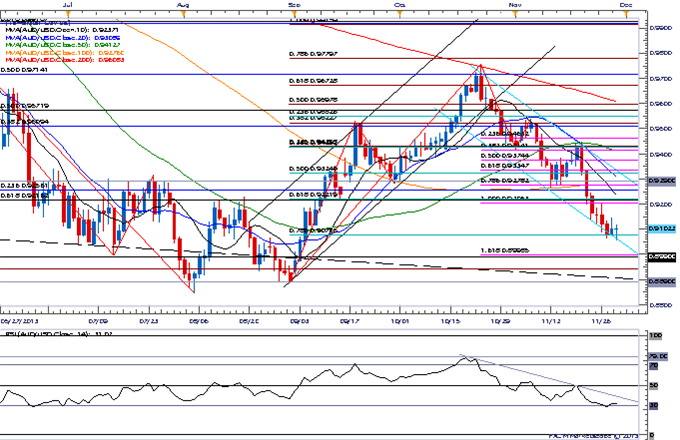 The dollar lost ground against two of the four components, led by a 0.20 percent rebound in the Australian dollar, but the higher-yielding currency may face further headwinds in the week ahead should the Reserve Bank of Australia (RBA) strengthens its argument to intervene in the currency market.

With the RBA widely expected to keep the benchmark interest rate at 2.50 percent, we’ll be keeping a close eye on the policy outlook as Governor Glenn Stevens appears to be casting a more dovish outlook for monetary policy, and the AUDUSD may continue to work its way back towards the 0.9000 handle as it searches for support.

Despite the rebound in the RSI, we still favor a ‘sell the bounce’ strategy as the bearish trend continues to take shape, and the AUDUSD remains at risk for a lower low following the lower high in October (0.9756).