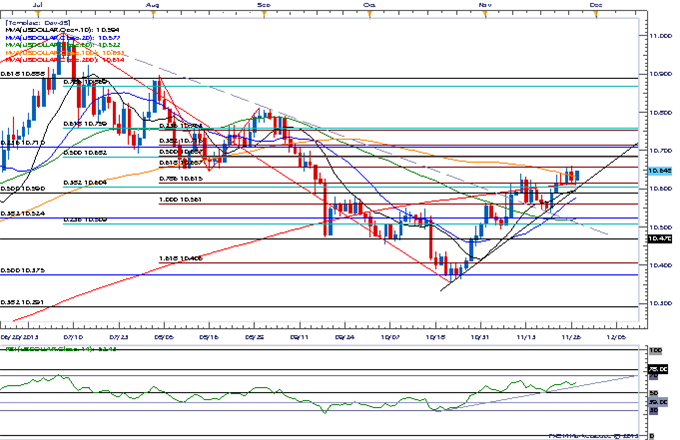 Despite the mixed batch of data coming out of the world’s largest economy, the Dow Jones-FXCM U.S. Dollar Index (Ticker: USDollar) appears to be making another run at resistance following the upward revision to the U. of Michigan Confidence survey, and the greenback may retain the range-bound price action throughout the holiday trade as market participants weigh the outlook for monetary policy.

With market participation thinning during the Thanksgiving holiday, end-of-month flows may provide choppy to whipsaw-like price action across the major currencies, but the current fundamental themes, especially the outlook for monetary policy, may continue to influence near-term price action as we look towards the last set of interest rate decisions for 2013.

Nevertheless, the technical outlook suggests that the rebound off of 10,354 may have been a mere correction asthe Relative Strength Index turns around ahead of overbought territory, and the greenback could be in a topping process should the oscillator fail to maintain the upward trend carried over from the previous month. In turn, if the November high (10,661) turns out to be a lower high on a longer-term series, the technicals may call for USD weakness in December, but a taper from the Fed would spur a more bullish outlook for the greenback as the central bank moves away from its easing cycle. 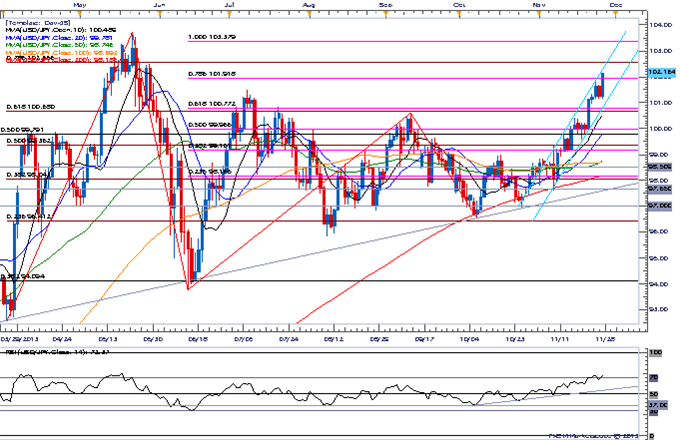 The greenback rallied against three of the four components, led by a 0.88 percent decline in the Japanese Yen, and the low-yielding currency may face additional headwinds over the next 24-hours of trading should the Consumer Price Index undermine the Bank of Japan’s (BoJ) pledge to achieve the 2 percent target for inflation by 2015.

With the headline reading for inflation expected to increase another 1.1 percent in October, stagnant price growth may limit the BoJ’s scope to retain its wait-and-see approach, but it seems as though Governor Haruhiko Kuroda will stick to the sidelines until Prime Minister Shinzo Abe unveils the ‘Third Arrow’ stimulus package.

With that said, expectations surrounding the Federal Open Market Committee (FOMC) December 17-18 meeting may continue to limit the downside for the USDJPY as we head into the final days of November.