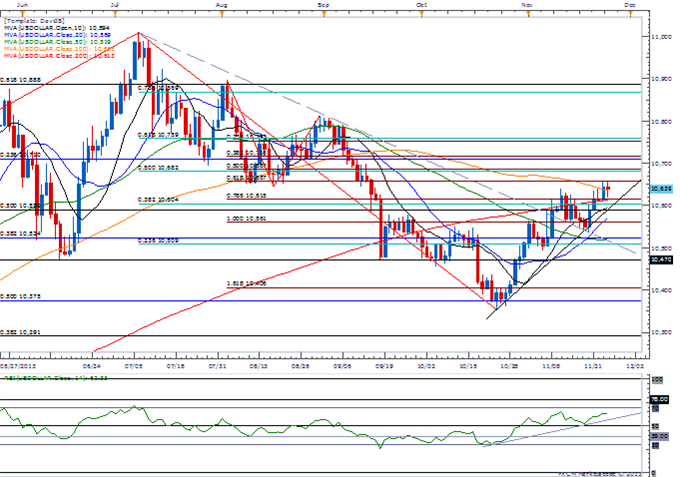 The near-term rally in the Dow Jones-FXCM U.S. Dollar Index (Ticker: USDollar) could be coming to an end as former support appears to be acting as new resistance, and we may see a more meaningful correction during the final days of November as there appears to be a bearish divergence in the Relative Strength Index.

Despite the higher high in price, the RSI may threaten the bullish trend from the previous month as the oscillator turns around ahead of overbought territory, but the Thanksgiving Holiday may produce choppy price action across the major currencies as market participation thins ahead of the weekend. Nevertheless, a near-term pullback may ultimately produce a higher low in the USDOLLAR, and the bullish sentiment surrounding the greenback may gather pace ahead of the Fed’s December 17-18 meeting amid the ongoing discussion to taper the asset-purchase program.

In turn, we will retain our game plan to ‘buy dips’ as the greenback persistently carves a series of higher highs paired with higher lows, and we may see the Federal Open Market Committee (FOMC) implement a small reduction in its quantitative easing program as the board refrains from undermining the taper-timeline laid out by Chairman Ben Bernanke. 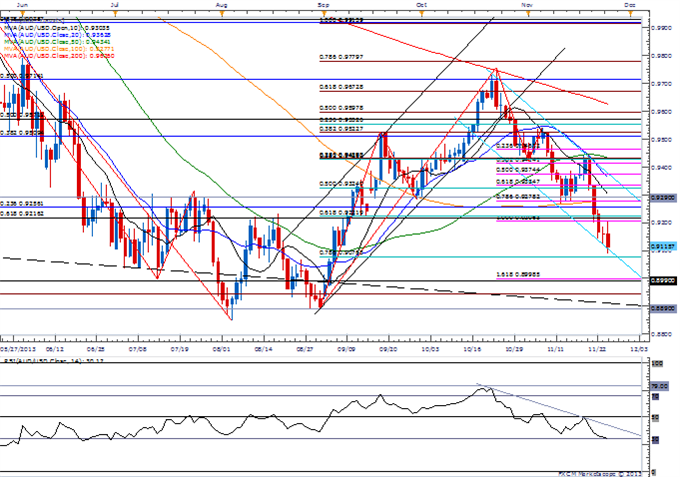 Three of the four components rallied against the greenback, led by a 0.27 percent advance in the Euro, while the Australian dollar bucked the trend, with the higher-yielding currency slipping another 0.48 percent.

The AUDUSD may continue to carve a series of lower lows paired with lower highs as the Reserve Bank of Australia (RBA) threatens to intervene in the currency market, and the aussie-dollar remains poised to face additional headwinds over the near to medium-term as China – Australia’s largest trading partner – looks to target a 7 percent rate of growth in 2014.

The bearish momentum may gather pace over the remainder of the week should the RSI push back below the 30 region, and we will continue to watch the downside targets for the AUDUSD as it struggles to find support.