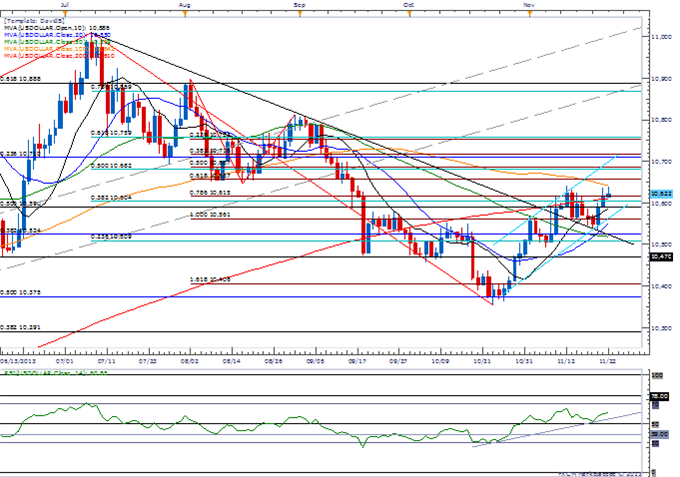 It looks as though the Dow Jones-FXCM U.S. Dollar Index (Ticker: USDollar) will end this week on a brighter note as former trendline resistance offers support, but the greenback may face choppy price action ahead of the Thanksgiving Holiday as it retains the range from earlier this month.

Nevertheless, the policy outlook may continue to limit the downside for the greenback as Atlanta Fed President Dennis Lockhart sees scope to taper the asset-purchase program at the December 17-18 meeting, and the dollar may continue to retrace the decline from earlier this year should the economic docket highlight a stronger recovery for the U.S. economy.

In light of the bullish momentum in the Relative Strength Index, the dollar looks poised to mark a higher high as it carves an upward trending channel, and we will look for opportunities to ‘buy dips’ in the reserve currency as market participants retain bets for a December taper.

It seems as though the Federal Open Market Committee (FOMC) will scales back its quantitative easing program by a small amount ($5B) as Fed officials refrain from undermining the taper-timeline laid out by Chairman Ben Bernanke, but the bullish USD forecast may fail to materialize if the central bank carries its highly accommodative policy stance into 2014. 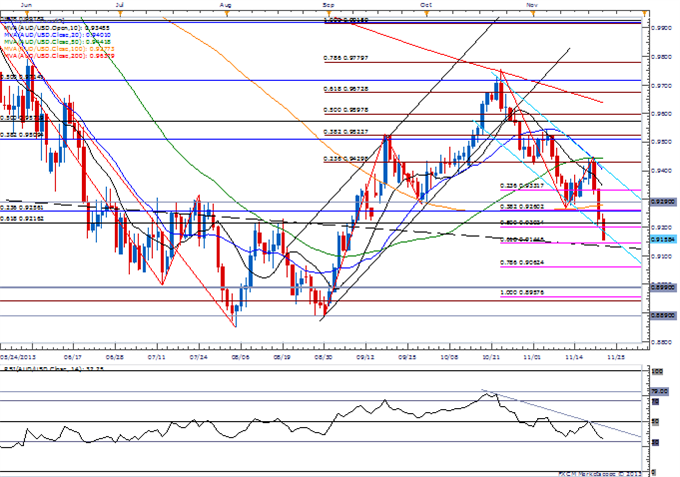 Two of the four components weakened against the greenback, led by a 0.81 percent decline in the Australian dollar, and the AUDUSD may track lower during the final days of November as it searches for support.

The bearish sentiment surrounding the Australian dollar may gather pace ahead of the next Reserve Bank of Australia (RBA) interest rate decision on December 2 as Governor Glenn Stevens threatens to intervene in the currency market, and the higher-yielding currency remains poised to face additional headwinds over the remainder of the year as the central bank keeps the door open to cut the benchmark interest rate further.

In turn, the AUDUSD may ultimately give back the rebound from 0.8840, and the pair may mark a lower low over the near-term as the bearish trend gathers pace.