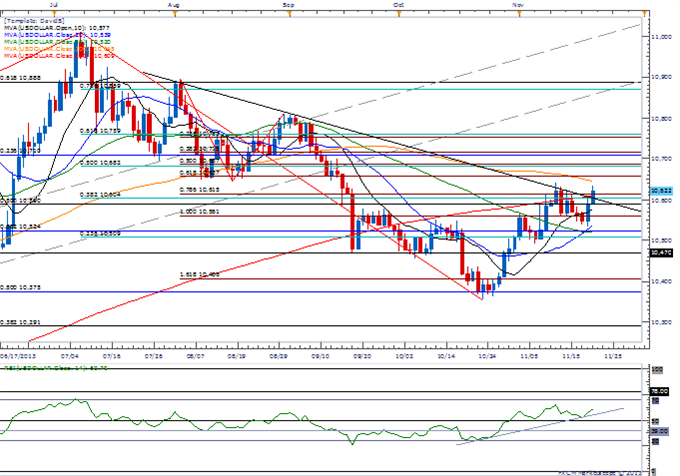 - USDOLLAR Breaks Out of Bearish Trend; Looking for Higher High

The Dow Jones-FXCM U.S. Dollar Index (Ticker: USDollar) looks poised to further retrace the decline from earlier this year as it breaks out of the bearish trend dating back to July.

Despite talks from the Federal Reserve to lower the Interest on Excess Reserves (IOER), growing speculation for a December taper has encouraged a more meaningful rally in the greenback as the central bank still sees scope to wind down its asset-purchase program in the coming months.

In turn, fresh comments from St. Louis Fed President James Bullard may spur further advances in the dollar as the Federal Open Market Committee (FOMC) voting member notes that a strong Non-Farm Payrolls print for November ‘would increase the probability some for a December taper,’ and the board may refrain from undermining the taper-timeline laid out by Chairman Ben Bernanke as it weighs on the central bank’s credibility.

The next topside objective comes in around the 61.8 percent Fibonacci expansion around 10,657 as the Relative Strength Index continues to carve a bullish trend, and we will look for a higher high ahead of the December 17-18 meeting as market participants weigh the outlook for monetary policy. 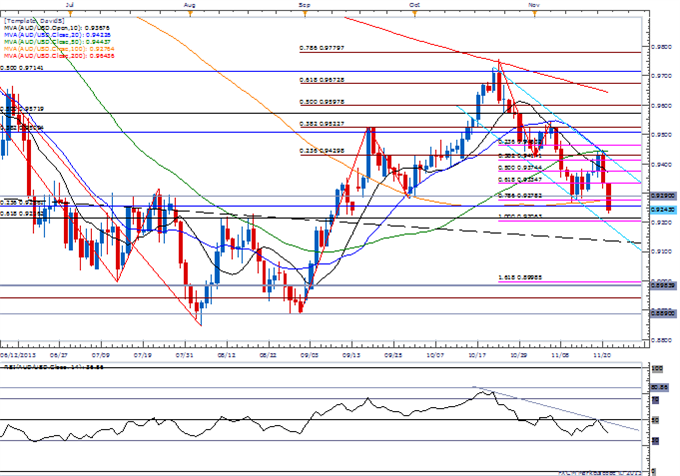 The greenback rallied against two of the four components, led by a 0.96 percent decline in the Australian dollar, and the AUDUSD may struggle to hold above former resistance (now support) as the Reserve Bank of Australia (RBA) threatens to intervene in the currency market.

It seems as though Governor Glenn Stevens is taking a more stern approach in weakening the local currency to further assist with the rebalancing of the real economy, and the central bank may have little choice but to further embark on its easing cycle as growth and inflation remains subdued.

A break below the 0.9200 handle may bring up the 2013 low (0.8846) back into play, and we will look for opportunities to ‘sell bounces’ in the AUDUSD as it continues to carve a series of lower highs paired with lower lows.