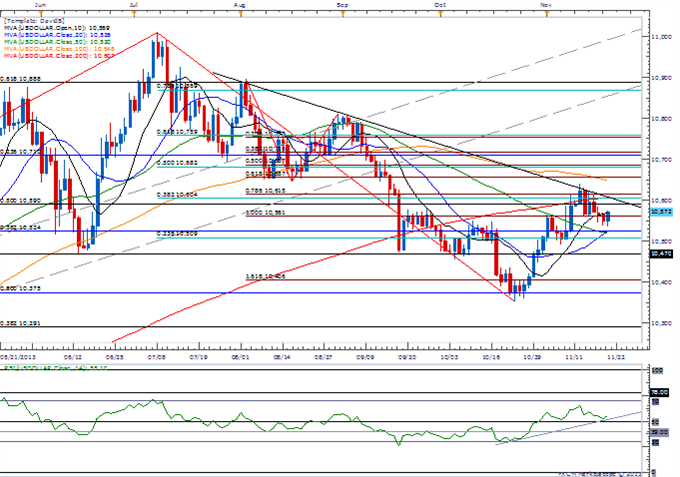 The Dow Jones-FXCM U.S. Dollar Index (Ticker: USDollar) pared the decline from earlier this week as St. Louis Fed President James Bullard, who votes on the Federal Open Market Committee (FOMC) this year, saw scope to taper the asset-purchase program at the December 17-18 meeting, and the fresh batch of central bank rhetoric may encourage a more meaningful recovery in the greenback as market participants continue to weigh the outlook for monetary policy.

The dollar may ultimately threaten the downward trend from back in July as the Relative Strength Index appears to be carving a more bullish structure, and the FOMC Minutes may strengthen the case for further dollar advances should the central bank show a greater willingness to move away from its easing cycle.

However, the advance to 10,641 may serve as a lower high should the policy statement undermine the taper-timeline laid out by Chairman Ben Bernanke, and the greenback may push to a lower low in the coming days if the Fed shows a greater willingness to carry its highly accommodative policy stance into 2014.

Join DailyFX on Demand to Cover for LIVE Coverage of U.S. Data Prints 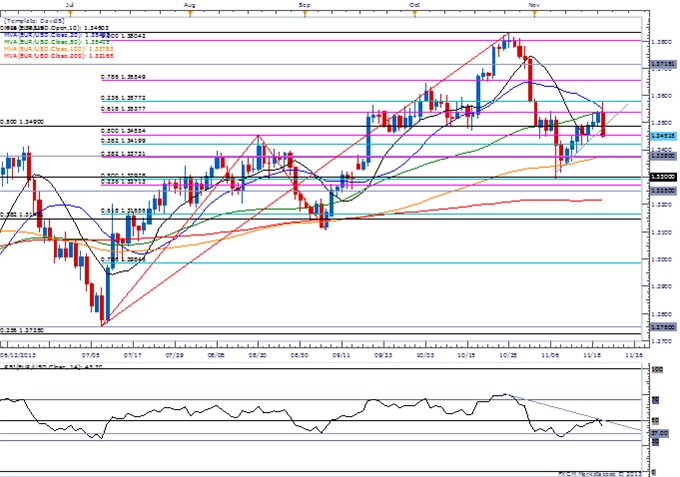 Two of the four components weakened against the greenback, led by a 0.63 percent decline in the Euro, and the single currency remains poised to face additional headwinds over the near-term as the European Central Bank (ECB) shows a greater willingness to implement negative deposit rates for the monetary union.

It seems as though the run towards 1.3570-80 will serves as a lower high as the pair fails to maintain the upward trend, and the single currency may work its way back towards the 1.3300 handle as a head-and-shoulders top takes shape.

In turn, we will look for opportunities to ‘sell bounces’ in the EURUSD, and the policy outlook may continue to drive the exchange rate lower as the ECB remains primed to further embark on its easing cycle.