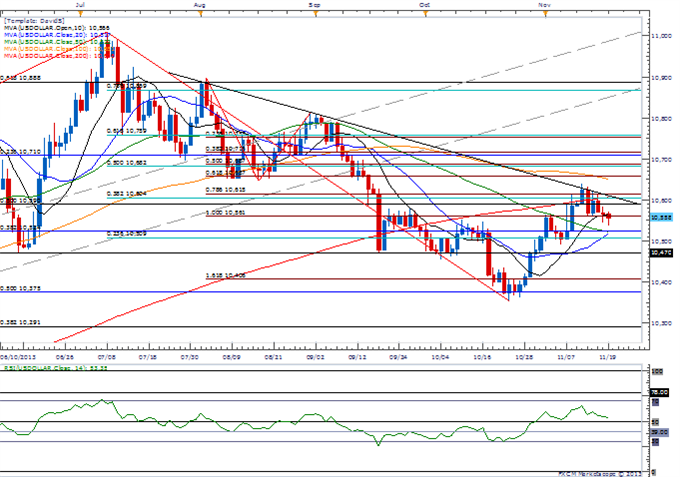 The Dow Jones-FXCM U.S. Dollar Index (Ticker: USDollar) is struggling to hold its ground ahead of the Federal Open Market Committee (FOMC) Minutes, with the greenback slipping to a fresh weekly low of 10,538, and the reserve currency may face additional headwinds over the next 24-hours of trading should we see a growing number of central bank officials show a greater willingness to carry the highly accommodative policy stance into 2014.

Fresh comments from Chicago Fed President Charles Evans, a 2013 FOMC voting member, may produce further declines in the dollar should the central bank dove highlight a weakened outlook for U.S. economy, and the USDOLLAR may ultimately carve a lower low over the near-term should the policy statement undermine the taper timeline laid out by Chairman Ben Bernanke.

Indeed, Mr. Bernanke is scheduled to speak later tonight, which could spark increased volatility in the USD, but central bank head may refrain from saying anything that can shift the policy outlook as Vice-Chair Janet Yellen looks poised to take the helm next year. 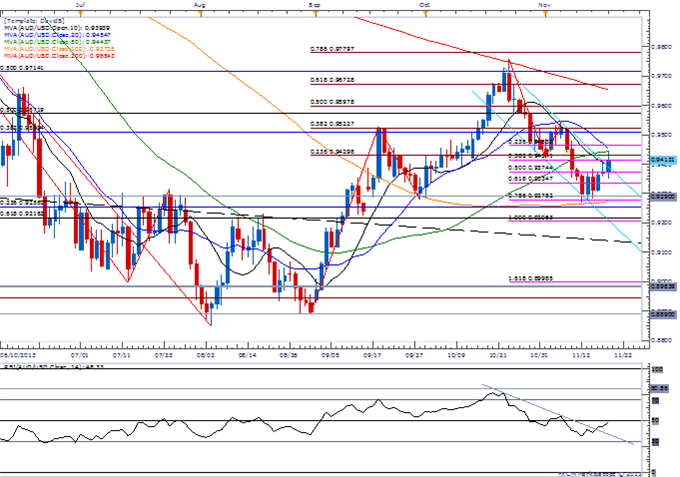 Two of the four components advanced against the greenback, led by a 0.39 percent rally in the Australian dollar, and the near-term correction in the AUDUSD may continue to take shape in the days ahead as the Reserve Bank of Australian (RBA) endorses a more neutral outlook for monetary policy.

The AUDUSD may continue to retrace the decline from earlier this month as the central bank sticks to a wait-and-see approach, but the pair may ultimately carve a lower high in the days ahead as Governor Glenn Stevens keeps the door open to implement additional rate cuts in the coming months.

In turn, the near-term correction may offer opportunities to sell the AUDUSD on a longer-term scale, and the higher-yielding currency remains at risk of facing additional headwinds as the RBA persistently tries to talk down the Australian dollar.