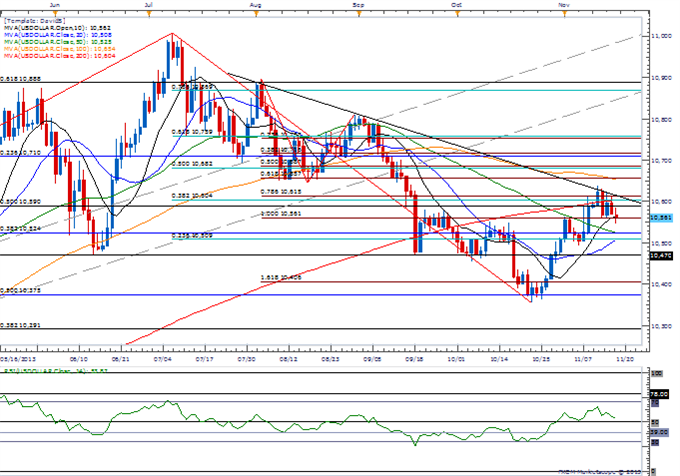 - USDOLLAR Struggles to Hold Interim Support Ahead of Fed Rhetoric

The Dow Jones-FXCM U.S. Dollar Index (Ticker: USDollar) extended the decline from the previous week, with the greenback failing to hold above interim support (10,561- 100.0 percent Fibonacci expansion), and the reserve currency may face additional headwinds in the days ahead should we see a growing number of Fed officials undermine the taper-timeline laid out by Chairman Ben Bernanke.

Indeed, the Federal Open Market Committee (FOMC) Minutes highlights the biggest event risk ahead of the Thanksgiving Holiday as market participants weigh the likelihood for a December taper, but the fresh batch of comments from William Dudley and Narayana Kocherlakota (2014 FOMC voting member) may dampen the appeal of the dollar should the central bank doves show a greater willingness to carry the highly accommodative policy stance into following year.

As a result, it seems as though the USDOLLAR has carved a lower high ahead of the Fed’s December 17-18 meeting, and the downward trend may continue to take shape over the remainder of the year should the FOMC continue to delay its exit strategy. 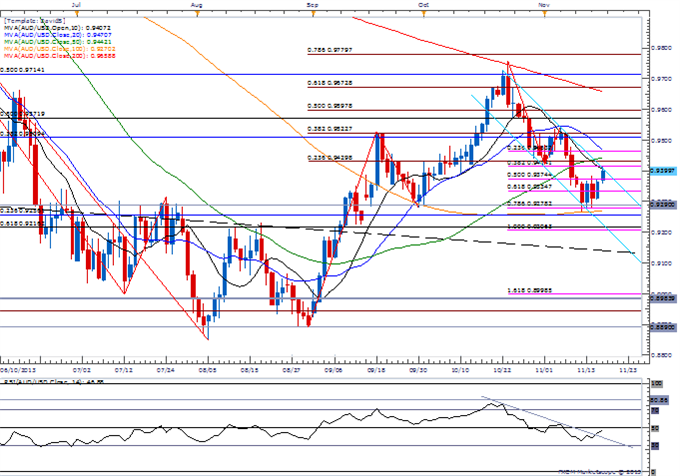 The greenback continued to lose ground against most of its major counterparts, led by a 0.35 percent rally in the Australian dollar, and the higher-yielding currency may appreciate further over the next 24-hours of trading should the Reserve Bank of Australia (RBA) Minutes strike a more neutral tone for monetary policy.

It seems as though the RBA will continue to endorse a wait-and-see approach as the benchmark interest rate sits at a record-low, but further attempts to talk down the Australian dollar may fail to bear fruit as the central bank appears to be moving away from its easing cycle.

In turn, the bullish break in the Relative Strength Index may foreshadow further advances in the AUDUSD, while Governor Glenn Stevens may take a more stern approach in weakening the local currency to further assist with the rebalancing of the real economy.