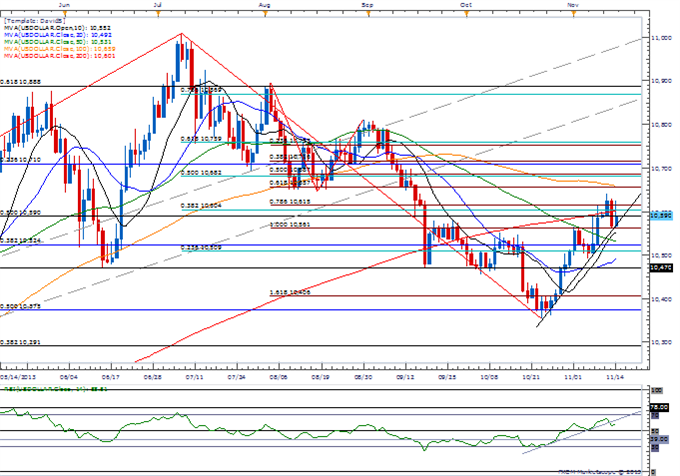 The Dow Jones-FXCM U.S. Dollar Index (Ticker: USDollar) pared the decline from earlier this week as Fed Chairman nominee Janet Yellen refrained from undermining the taper-timeline laid out by Ben Bernanke, but the near-term rally could be coming to an end as the Relative Strength Index fails to maintain the bullish momentum.

Ms. Yellen said little in terms of the policy outlook as the prepared remarks highlighted a rather upbeat tone for the U.S. economy, but it seems as though that the 2014 Federal Open Market Committee (FOMC) may continue to delay the taper as she argues that there is no ‘misalignment’ in asset prices.

In turn, the rebound off of the October low (10,354) may have been just a correction, and the lack of momentum to push back above former support (10,658- 61.8 percent Fibonacci extension) may highlight a turning point for the dollar as it appears to have carved out a lower high in November. 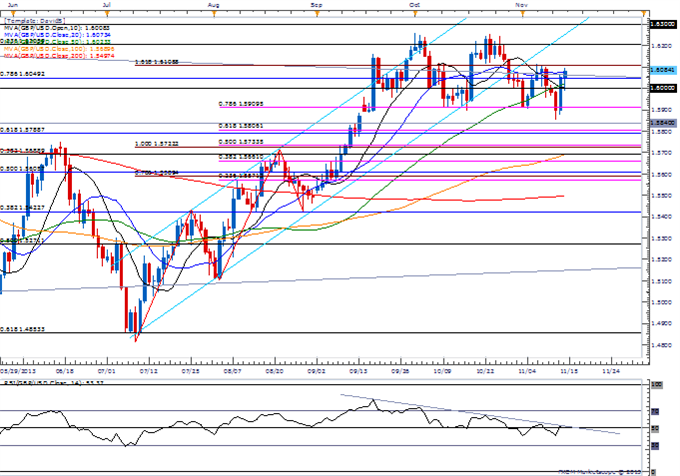 The greenback managed to gain ground against three of the four components, while the British Pound bucked the trend, with the GBPUSD pushing back towards the 1.6100 handle.

The market reaction to the weaker-than-expected U.K. Retail Sales report was short-lived, with the GBPUSD continue to mark closes above the 1.5900 handle, and the sterling looks rather constructive from here as the RSI breaks out of the bearish trend dating back to September.

With the Bank of England (BoE) Minutes due out next week, the shift in the policy outlook should continue to limit the downside for the British Pound, and the GBPUSD could be coiling up for a more meaningful move at 1.6300 as the central bank looks poised to implement its exit strategy ahead of schedule.