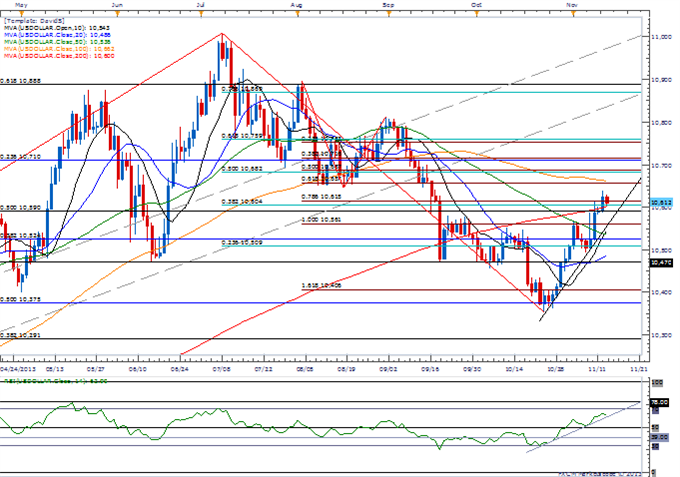 The pullback in the Dow Jones-FXCM U.S. Dollar Index (Ticker: USDollar) was short-lived, with the greenback paring the overnight decline to 10,603, and the reserve currency may continue to track higher over the remainder of the week as the outlook for the global economy deteriorates.

A marked downward revision in Japan’s 3Q Gross Domestic Product (GDP) report may heighten the appeal of the greenback as it undermines the Bank of Japan’s (BoJ) pledge to achieve the 2 percent inflation target by 2015, while the fresh batch of comments from Fed Chairman Ben Bernanke may offer further support for the dollar should the central bank head continue to layout his timeline to taper the asset-purchase program.

In turn,the USDOLLAR may continue to carve a series of higher highs paired with higher lows in the days ahead, and we will for opportunities to ‘buy dips’ in the greenback as the bullish momentum gathers pace. 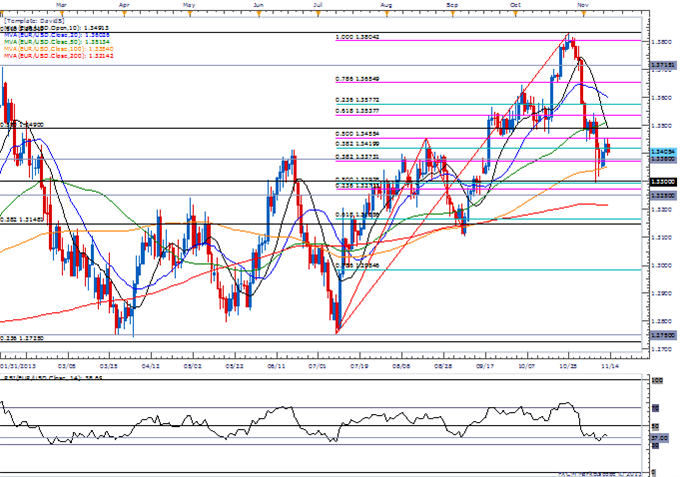 The greenback lost ground against most of its major counterparts, while the Euro is struggling to hold its ground ahead of the 3Q GDP report as European Central Bank (ECB) board member Peter Praet sees scope for additional monetary support in the euro-area.

The Euro remains at risk of facing additional headwinds over the next 24-hours of trading should the growth report highlight a marked slowdown in the economy, and the ECB may come under increased pressure to further embark on its easing cycle amid the threat for deflation.

As a result, the EURUSD may have already carved a near-term top around the 1.3450-60 region, and we may see another move back towards the 1.3300 handle should the fundamental outlook for the monetary union turn increasingly bleak.