- Euro Correction to Offer Selling Opportunities Ahead of 3Q GDP

The breakout in the Dow Jones-FXCM U.S. Dollar Index (Ticker: USDollar) gathered pace during the holiday trade and the greenback may continue to retrace the decline from back in July as the positive developments coming out of the world’s largest economy raises the scope for a Fed taper at the December 17-18 meeting.

With a slew of Fed officials scheduled to speak later this week, we may see a growing number of central bank officials show a greater willingness to abide by taper-timeline laid out by Chairman Ben Bernanke, and a material shift in the policy outlook may spur a more meaningful rally in the dollar should the 2014 FOMC members adopt a more upbeat tone for the U.S. economy.

At the same time, there’s headlines suggesting that China will target a 7 percent rate of growth in 2014 as the new government moves away from the export-driven market to a more consumer-based economy, and the greenback may also get a boost from safe-haven flows as the weakening outlook for global growth drags on risk sentiment. 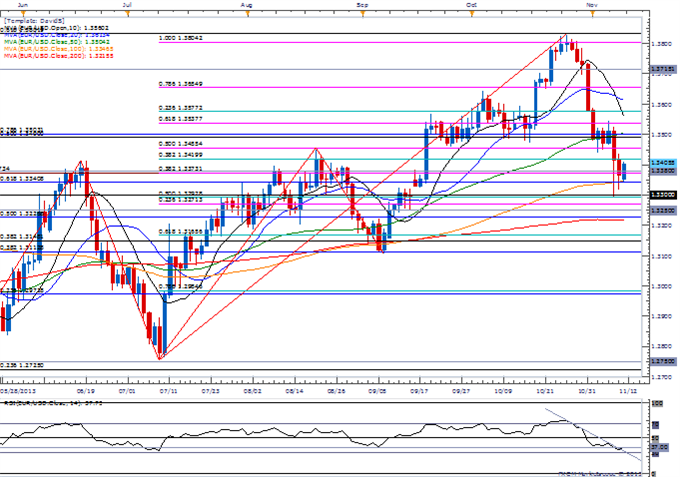 Three of the four components weakened against the greenback, led by a 0.33 percent decline in the Australian dollar, while the Euro bucked the trend, with the single currency gaining 0.30 percent.

The relief rally in the EURUSD may continue to take shape as the RSI appears to be breaking out of the bearish momentum, but the single currency may face additional headwinds this week as the 3Q GDP report is expected to show a slowing recovery in the monetary union.

If data coming out of the euro-area continues to disappoint, we will look for move back towards the 1.3300 support region, and it seems as though the European Central Bank (ECB) will further embark on its easing cycle as President Mario Draghi retains the forward-guidance for monetary policy.