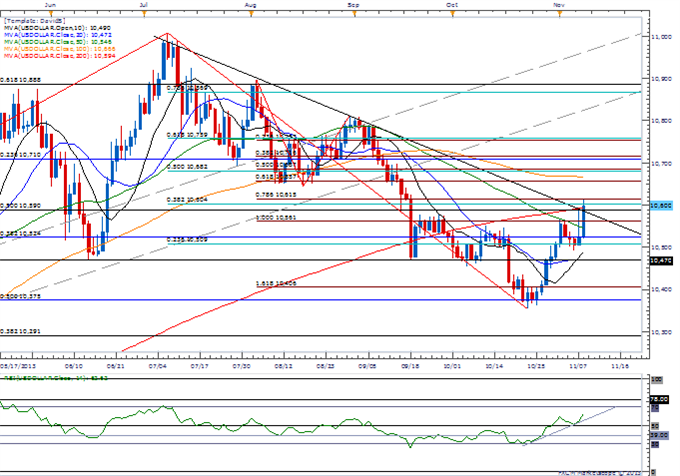 - Japanese Yen Struggling to Maintain Bullish Momentum From May

The Dow Jones-FXCM U.S. Dollar Index (Ticker: USDollar) broke out of the bearish trend as Non-Farm Payrolls climbed a whopping 204K in October, and the greenback may continue to retrace the decline from back in July as the fundamental outlook for the world’s largest economy improves.

Indeed, the dollar looks poise for a more meaningful rally amid the bullish momentum in the Relative Strength Index, and we would like to see a close above trendline resistance for added confirmation as it continues to find resistance around 10,589 (50.0 Fibonacci retracement) to 10,615 (78.6 Fibonacci expansion).

Nevertheless, a deeper look at the NFP report showed the jobless rate rising to an annualized 7.3% even as the Labor Force Participation Rate narrowed to 62.8 percent - the lowest reading since 1978 – while Average Hourly Earnings increased an annualized 2.2 percent amid forecasts for a 2.3 percent print.

The strong 3Q GDP report paired with the pickup in job growth may heighten the Fed’s scope to taper the asset-purchase program at the December 17-18 meeting, but the central bank may look to carry its highly accommodative policy stance into 2014 as discouraged workers continue to leave the labor force. 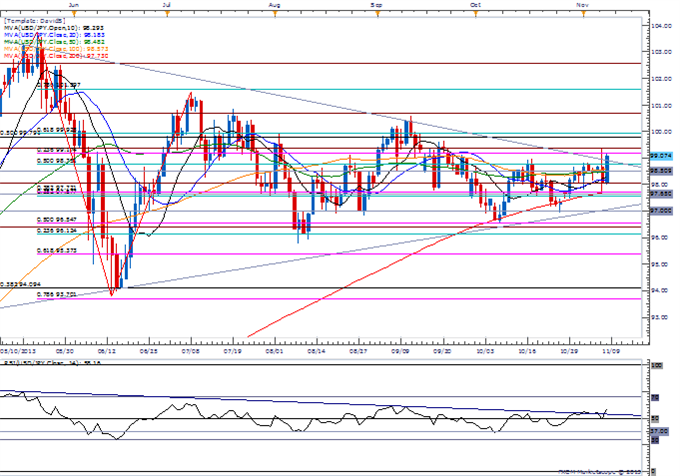 The greenback continued to gain ground against its major counterparts, with the Japanese Yen falling 0.98 percent, and the USDJPY looks primed for a move higher as it appears to be breaking out of the bearish trend dating back to May.

At the same time, the topside break in the RSI provides added conviction that we should look higher for the USDJPY, and it seems as though we’re on our way for a more meaningful move towards the 100.00 handle as the pair carves out a higher low in November.

In turn, we will cautious look to buy dips in the pair and would like to see a close above trendline resistance as well to confirm a more bullish forecasts for the USDJPY.