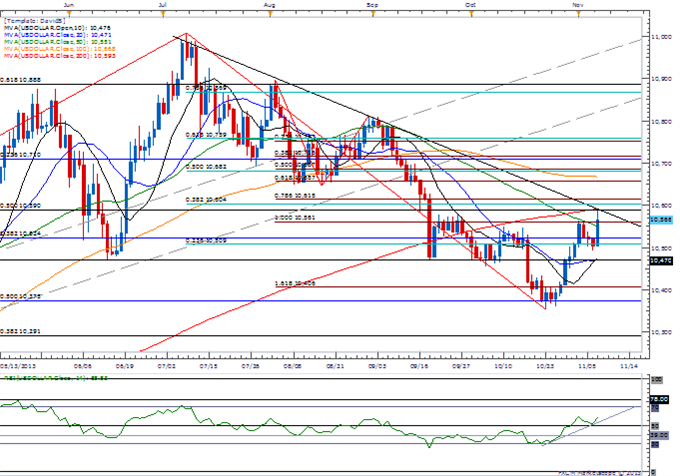 The Dow Jones-FXCM U.S. Dollar Index (Ticker: USDollar) rallied to a fresh monthly high of 10,589 following the stronger-than-expected 3Q GDP report, and the reserve currency is certainly at a critical juncture as it threatens the downward trend dating back to July.

With market participants now turning their attention to the highly anticipated Non-Farm Payrolls report, an upbeat employment print should offer a more meaningful advance going into the end of the week, while the Relative Strength Index also looks pretty constructive from here as it appears to be carving a bullish trend.

It seems as though forecasts for a 120K NFP print may undershoot as the 3Q GDP report highlights a pickup in growth, but we will need to keep a close eye on the jobless rate as well as unemployment is expected to widen to 7.3 percent from 7.2 percent in September.

In turn,a key topside break should foster a larger retracement of the July decline, and the rally may gather pace ahead of the Fed’s December 17-18 meeting amid the ongoing discussion to taper the asset-purchase program. 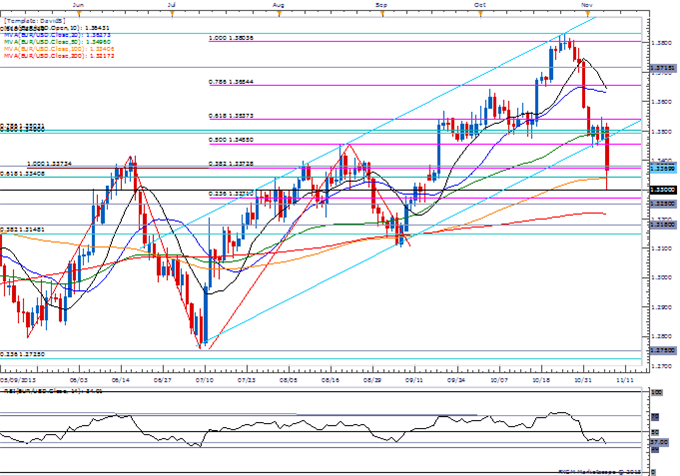 The greenback rallied across the board, led by a 1.04 percent decline in the Euro, and the single currency may face additional headwinds over the remainder of the year as the European Central Bank (ECB) continues to see the ‘interest rates to remain at present or lower levels for an extended period of time.’

Indeed, it seems as though the ECB will further embark on its easing cycle amid the ongoing discussion for negative interest rates, and President Mario Draghi may continue to face pressures to weaken the single currency as growth and inflation remains subdued.

As a result, a head-and-shoulders top appears to be taking shape in the EURUSD, and the pair remains at risk for a more meaningful decline over the near-term as the Governing Council adopts a more dovish tone for monetary policy.