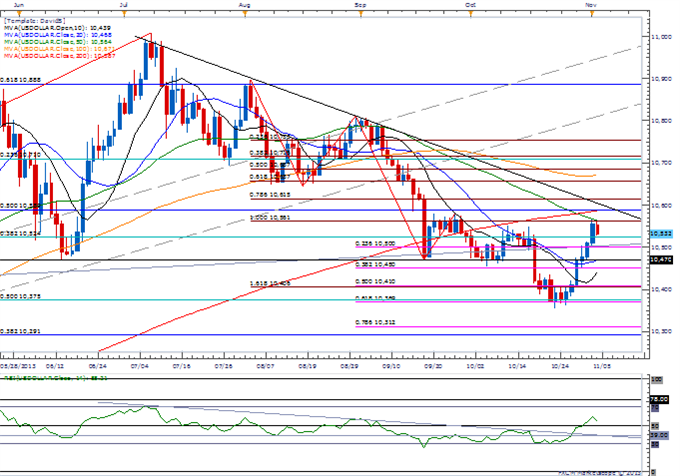 The Dow Jones-FXCM U.S. Dollar Index (Ticker: USDollar) turned around after tagging the 50-Day SMA (10,564) for the first time since September, and the greenback may have carved a near-term top as the bearish trend continues to take shape.

Indeed, the reserve currency may face additional headwinds this week as the advance 3Q GDP report is expected to highlight a slowing recovery, while U.S. Non-Farm Payrolls are projected to increase a mere 125K in October versus the 148K print from the month prior.

A slew of disappointing data may ultimately generate a lower low in the USDOLLAR, and the policy outlook may continue to limit the upside for the greenback as it raises the Fed’s scope to carry its highly accommodative policy stance into 2014. 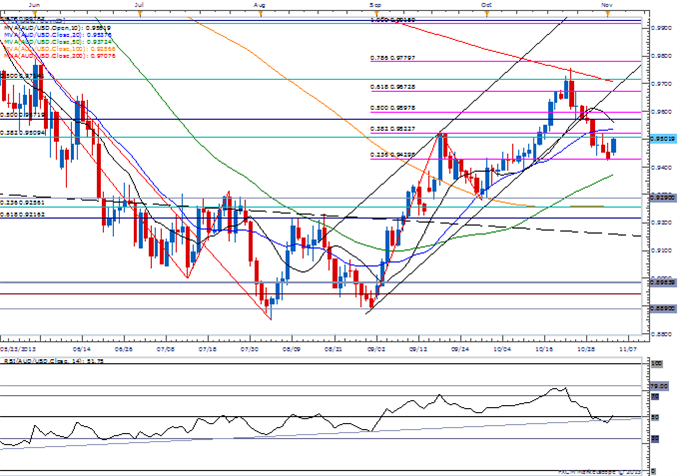 All four components strengthened against the greenback, led by a 0.67 percent rally in the Australian dollar, and the AUDUSD may breakout of the range-bound price action carried over from the previous week as the Reserve Bank of Australia (RBA) is widely expected to keep the benchmark interest rate at 2.50 percent.

However, Governor Glenn Stevens may increase his efforts in talking-down the local currency as a means to further assist with the rebalancing of the real economy, and Australian dollar may threaten the bullish trend from earlier this year should the central bank sound more dovish this time around.

As a result, the policy statement may heavily impact the near-term forecast for the AUDUSD, and the pair may struggle to retain the advance from July if the RBA shows a greater willingness to further embark on its easing cycle.