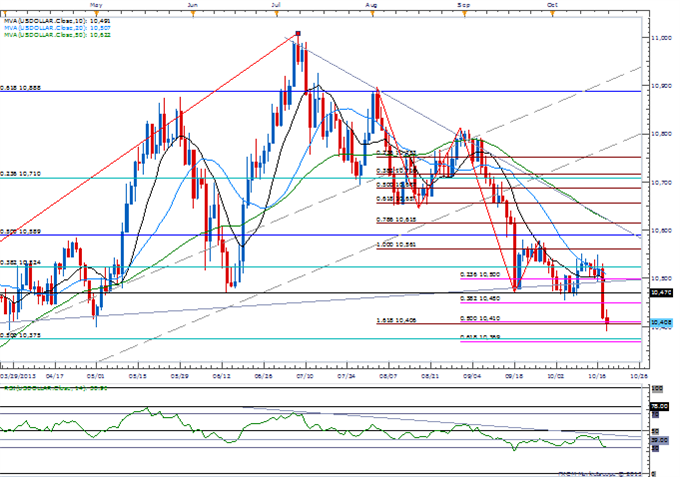 USD Getting Oversold Ahead of NFPs- AUD Correction on Horizon

The Dow Jones-FXCM U.S. Dollar Index (Ticker: USDollar) extended the decline from earlier this week as a growing number of Fed officials scale back their willingness to taper the asset-purchase program, and the bearish sentiment surrounding the reserve currency may gather pace over the near-term as market participants see a further delay in the central bank’s exit strategy.

Indeed, Chicago Fed President Charles Evans, a voting member on the Federal Open Market Committee (FOMC), said tapering the quantitative easing program is likely to be postponed following the government shutdown, and it seems as though the central bank will retain its highly accommodative policy stance throughout the remainder of the year in an effort to combat the fiscal drag.

As a result, more dovish rhetoric coming out of the Fed is likely to produce further weakness in the USD, and we may see a move into 10,369 (61.8 percent expansion) to 10,375 (50.0 percent retracement) as the reserve currency continues to search for support.

Nevertheless, the fundamental developments coming out of the world’s largest economy may help limit the downside for the greenback as U.S. Non-Farm Payrolls are projected to increase another 180K in September, but a further deterioration in the Participation Rate may undermine the job growth figures as the FOMC sticks to its forward-guidance for monetary policy. 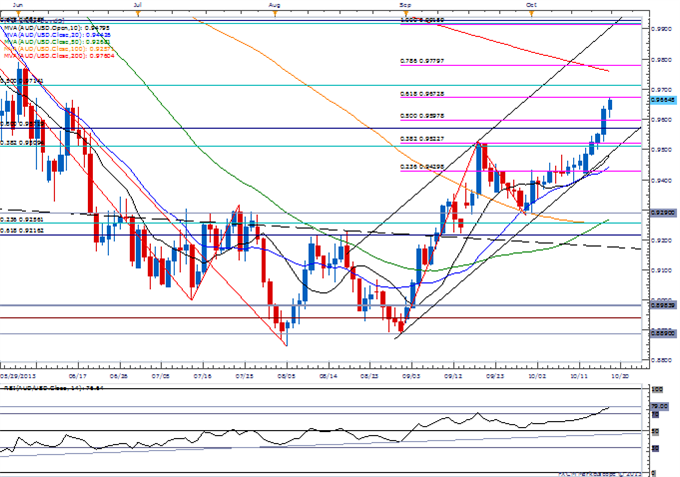 Three of the four components strengthened against the greenback, led by a 0.30 percent rally in the Australian dollar, but the AUDUSD may face a near-term correction in the days ahead as the Relative Strength Index approaches resistance (79).

Australia’s Consumer Price report may serve as the fundamental catalyst to spark a more meaningful pullback in the exchange rate as the headline reading for inflation is expected to narrow to an annualized 1.8 percent from 2.4 percent in the second-quarter, and a marked slowdown in price growth may renew bets for further rate cuts from the Reserve Bank of Australia (RBA) as the region continues to face an uneven recovery.