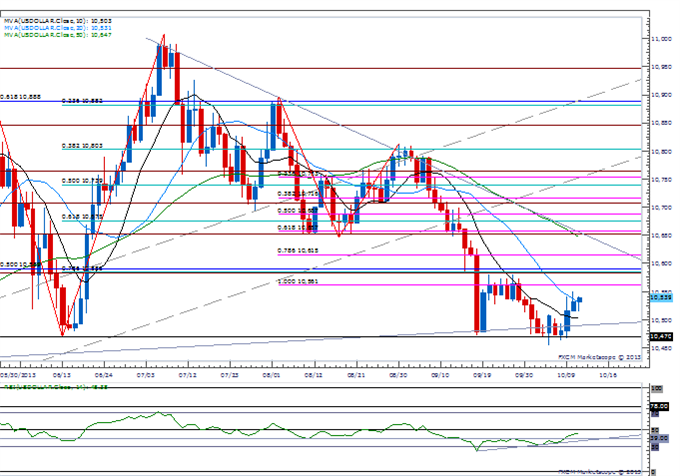 USD at Risk of Limited Rebound- JPY Searching for Support

The relief rally in the Dow Jones-FXCM U.S. Dollar Index (Ticker: USDollar) continues to take shape on Friday amid hopes that Congress will reach a near-term solution to get the government back up and running.

The relief rally may gather pace next week as U.S. policy makers mull a six-week plan to raise the debt ceiling, but the rebound may be limited as the fiscal drag dampens the outlook for the world’s largest economy. As a number of Fed officials are scheduled to speak next week, including Chairman Ben Bernanke, the fresh batch of central bank rhetoric may highlight a greater willingness to delay the exit strategy further, and the dollar may face additional headwinds over the near to medium-term amid the risk of seeing the FOMC carry its highly accommodative policy stance into 2014.

As a result, the dollar may remain capped around 10,582 (23.6 percent Fibonacci expansion) to 10,589 (50.0 retracement), and the longer dating bearish trend may continue to take shape ahead of the Fed’s October 29-30 meeting as market participants scale back bets of seeing the central bank taper its asset-purchase program later this month. 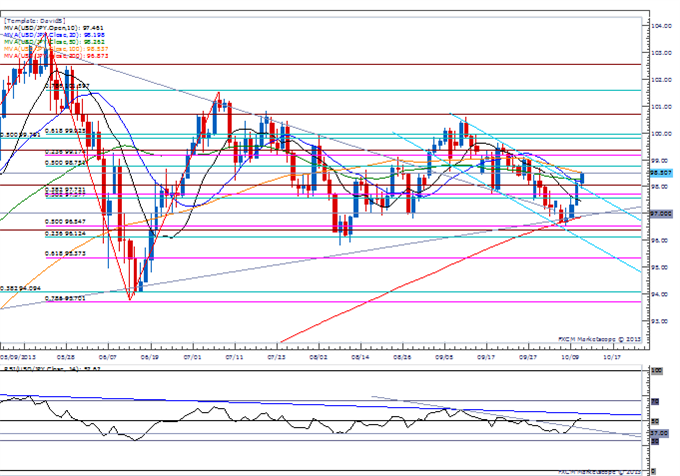 Two of the four components gained ground against the greenback, led by a 0.12 percent rally in the Australian dollar, while the Japanese Yen continued to weaken against its major counterparts, with the USDJPY advancing to a fresh weekly high of 98.58.

It looks as though it will only be a matter of time before we see a more meaningful move at 98.75 (50.0 percent Fib retracement) as the bullish breakout takes shape, and we may see the dollar continue to strengthen against its Japanese counterpart as the Relative Strength Index looks poised to threaten the bearish momentum dating back to May.

Despite the delay in the Fed’s exit strategy, expectations of seeing a debt resolution may continue to push the USDJPY higher, but the policy outlook may generate further Yen strength as the Bank of Japan (BoJ) continues to sit on the sidelines.