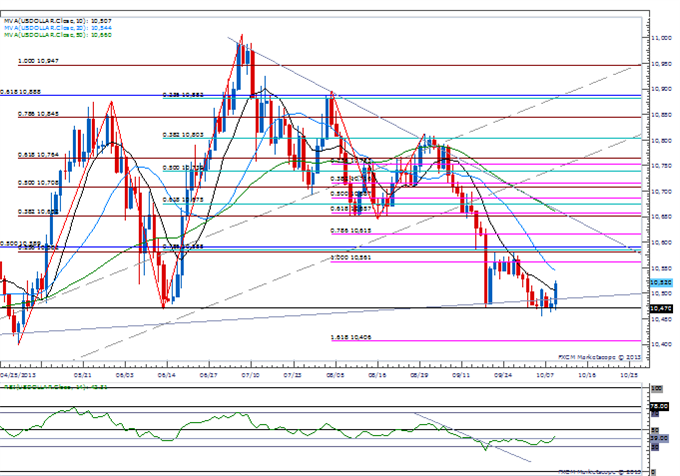 - USDOLLAR Rebounds Ahead of FOMC Minutes Despite Yellen Nomination

The Dow Jones-FXCM U.S. Dollar Index (Ticker: USDollar) climbed to a fresh weekly high of 10,525 even as the Obama Administration nominated Janet Yellen for the Fed chairmanship, and greenback may continue to track higher over the remainder of the week should the Federal Open Market Committee (FOMC) Minutes highlight a greater willingness to start tapering the asset-purchase program later this year.

Indeed, the policy statement may reveal further arguments to move away from the easing cycle amid the ‘close call’ to retain the highly accommodative policy stance at the September meeting, and we may see a more meaningful rebound in the reserve currency should the central bank retain the taper timeframe laid out by Fed Chairman Ben Bernanke. As a result, we may see the dollar threaten resistance in the coming days, but the bearish sentiment surrounding the reserve currency may continue to gather pace should the central bank sound more cautious this time around.

The fiscal drag may prompt the FOMC to further delay its exit strategy amid the deadlock in Congress, and the government shutdown may keep the USDOLLAR capped within its current range amid the looming threat of a U.S. default. 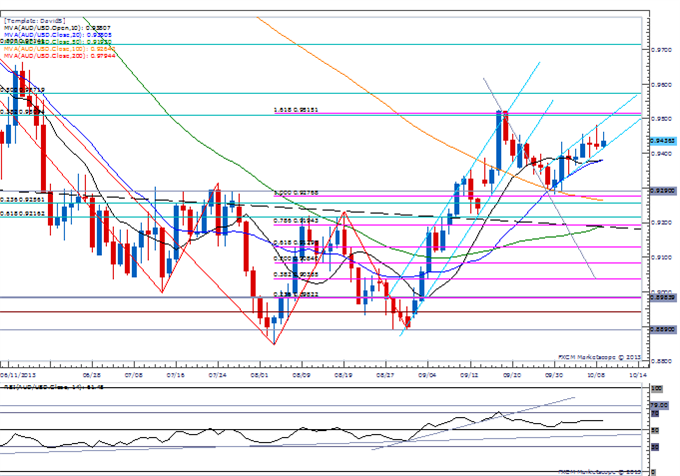 Three of the four components weakened against the greenback, led by a 0.88 percent decline in the British Pound, while the Australian dollar bucked the trend, with the AUDUSD climbing to a high of 0.9464.

The AUDUSD continues to work its way towards 0.9500 (38.2 percent retracement) to 0.9515 (1.618 percent expansion) despite the drop in market sentiment, and higher-yielding currency may continue to outperform over the next 24-hours of trading as Australia Employment is expected to rebound 15.0K in September.

As a result, a positive data print may dampen bets of seeing additional rate cuts from the Reserve Bank of Australia (RBA), but we may see Governor Glenn Stevens make further attempts to talk down the local currency in an effort to further assist with the rebalancing of the real economy.