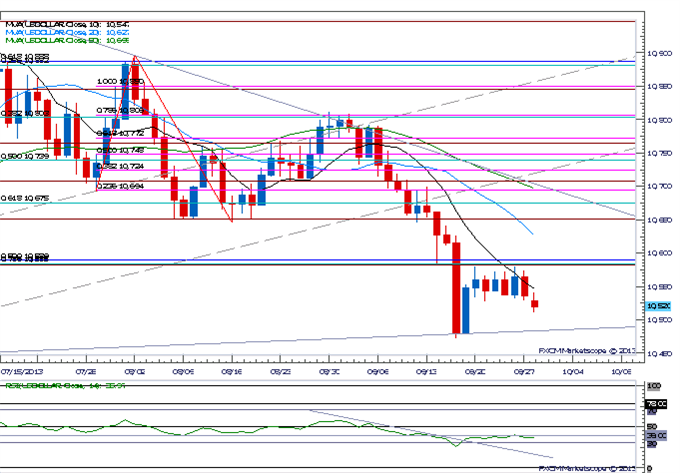 - USDOLLAR Remains Under Pressure Ahead of U.S. Debt Deal

The Dow Jones-FXCM U.S. Dollar Index (Ticker: USDollar) remains under pressure amid the ongoing threat of a government shutdown, but a near-term resolution may spark a relief rally in the reserve currency should the U.S. avoid default.

Indeed, a debt deal may finally trigger a topside break as the Fed’s ‘taper talk’ gathers pace ahead of the October meeting. With the broader theme coming back into focus, data prints highlighting a strong Non-Farm Payrolls report may spur a greater argument for the FOMC to implement its exit strategy next month.

In turn, the major fundamental developments on tap for later this week may spur fresh near-term trends across the dollar pairs. 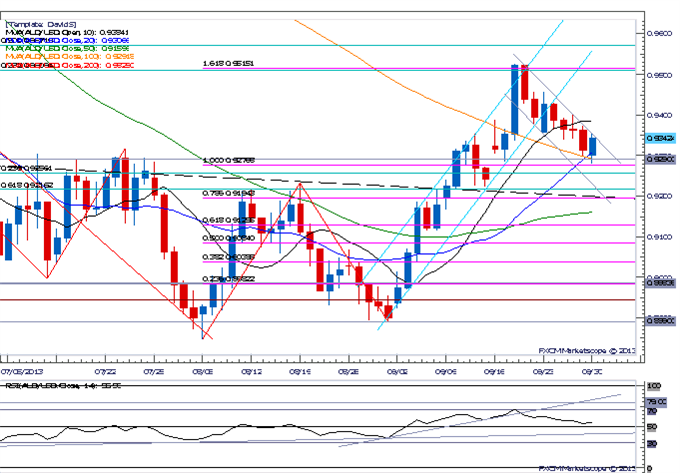 All four components strengthened against the greenback, led by a 0.29 percent rally in the Australian dollar, but the rebound may be short-lived should the Reserve Bank of Australia (RBA) increased its efforts in talking down the local currency.

RBA Governor Glenn Stevens may continue to press for a weaker aussie in an effort to further assist the rebalancing of the real economy, and the bearish trend may continue to take shape in October if we see interest rate expectations come back under pressure.

In turn, the weakening fundamentals may spur a lower low in the AUDUSD as the pair appears to have carved a lower high this month.