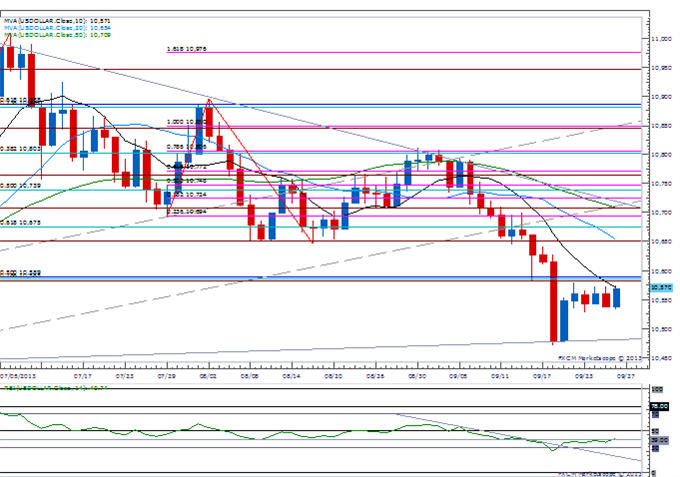 USD Continues to Build Base- JPY to Falter on Slower Inflation

It certainly seems as though market participants are still waiting on a fundamental catalyst to move as the Dow Jones-FXCM U.S. Dollar Index (Ticker: USDollar) preserves the range-bound price action from earlier this week, but the greenback appears to be coiling up for a move higher as it continues to build a short-term base during the final days of September.

Despite the mixed batch of data coming out of the U.S. economy, Richmond Fed President Jeffrey Lacker argued that the FOMC should taper ‘a third of the way each time’ as the committee moves away from its easing cycle, while Fed Governor Jeremy Stein warned that the central bank needs to ‘reduce uncertainty’ surrounding its exit strategy amid growing speculation of seeing the first taper at the October 29-30 meeting.

In light of the limited reaction to the slew of U.S. data prints from earlier this week, it seems as though we will need to keep a close eye on the news wire as we still have more Fed officials scheduled to speak over the remainder of the week, and the fresh batch of central bank rhetoric may have a greater impact in driving USD price action ahead of October as market participants weigh the outlook for monetary policy. 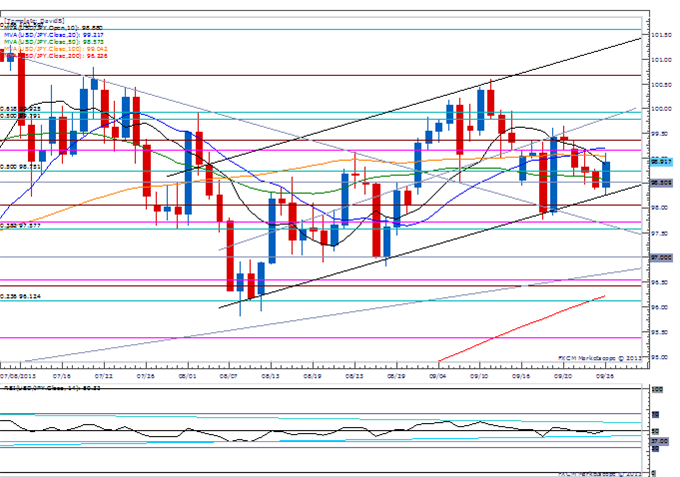 The greenback rallied across the board, led by a 0.50 percent decline in the Japanese Yen, and the bullish trend in the USDJPY should continue to take shape amid the deviation in the policy outlook.

Over the next 24-hours of trading, Japan’s Consumer Price report may also prop up the dollar-yen should the print limit the scope of seeing the Bank of Japan (BoJ) achieve its 2 percent target for inflation, and Governor Haruhiko Kuroda may come under increased pressure to implement more non-standard measures especially as the new government remains on track to raise the sales tax for the first time in fifteen years.

In turn, we will retain a bullish outlook for the USDJPY, and will look for opportunities to buy dips in the exchange rate as the upward trending channel continues to take shape.