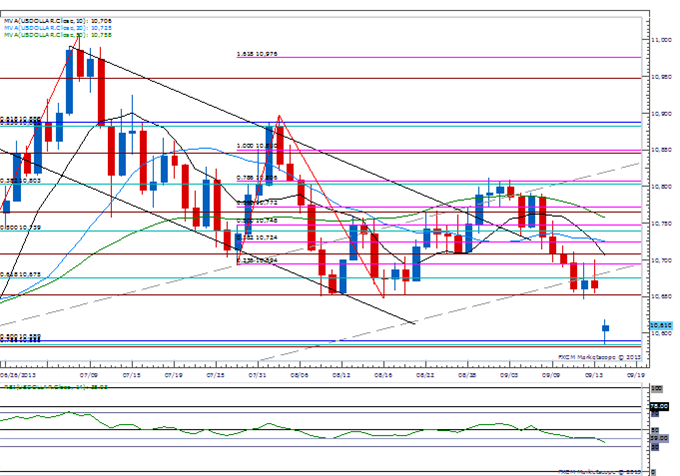 USD Gaps to Offer Trade Opportunities Ahead of FOMC Meeting

The Dow Jones-FXCM U.S. Dollar Index (Ticker: USDollar) tumbled to a fresh monthly low of 10,584 as Lawrence Summers (the more hawkish contender) withdrew his candidacy for the Fed Chairmanship, but the opening gap across dollar pairs may get filled going into the Federal Open Market Committee (FOMC) meeting as market participants see the central bank tapering the pace of its bond-purchasing program from $45B.

Even though Janet Yellen appears to be on her way to take the helm of the central bank, former Vice Chairman Donald Kohn, who was also mentioned by President Barack Obama as a potential nominee, warned that very easy monetary policy may create dangerous risks, and the dollar may continue to carve higher lows over the remainder of the amid the more hawkish composition for the 2014 FOMC.

Nevertheless, should the confluence of Fibonacci retracements and expansions around 10,582-10,589 hold up as near-term support, our initial topside target comes in around former support (38.2 percent Fib expansion- 10,652), and we may see a more meaningful recovery in the greenback should the Fed show a greater willingness to implement its exit strategy over the coming months. 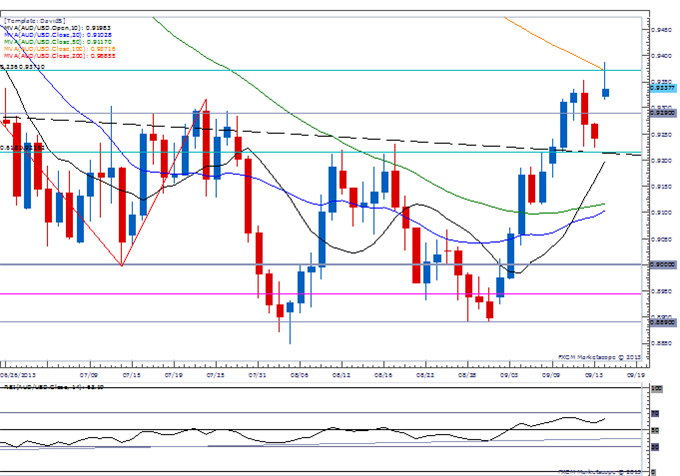 The greenback weakened across the board, led by a 1.05 percent rally in the Australia dollar, but the higher-yielding currency may end up putting in a close below the 23.6 percent Fib retracement around 0.9370-80 as the rise in market sentiment tapers off.

At the same time, the Reserve Bank of Australia (RBA) Minutes due out later tonight may further dampen the appeal of the aussie should the central bank continue to see scope for further rate cuts, but the AUDUSD may continue to face range-bound prices over the near-term if we see the central bank strike a more neutral tone for monetary policy.

In turn, we will keep a close eye on the RSI as it comes up against resistance, and a topside break in the oscillator may bring up 0.9570 (50.0 retracement) to 0.9600 (38.2 retracement) on our radar as the RBA appears to be concluding its easing cycle.