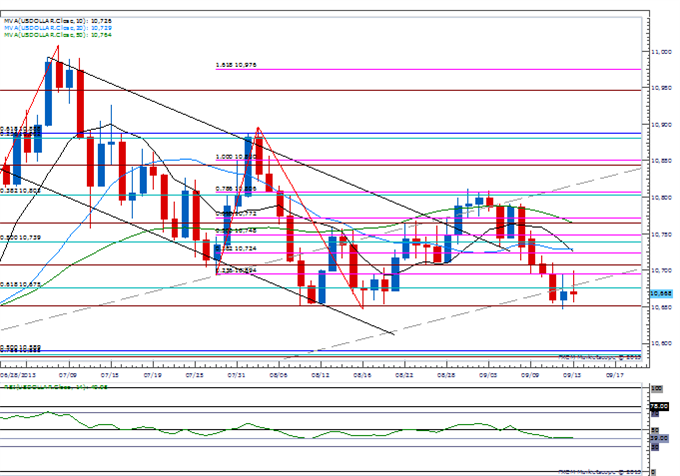 USD Bottom in Place Ahead of FOMC- GBP Eyes 1.59 on BoE Policy

- USDOLLAR Continues to Hold Key Support Ahead of Fed Meeting

The near-term correction in the Dow Jones-FXCM U.S. Dollar Index (Ticker: USDollar) certainly appears to be coming to an end as it preserves the August low (10,646), and the greenback may continue to build a short-term base ahead of the Federal Open Market Committee (FOMC) meeting as market participants see the central bank tapering its asset-purchase program by $10B next week.

Despite the slew of dismal data coming out of the world’s largest economy, the Relative Strength Index also suggests that the dollar is carving a higher low as the oscillator remains supported around the 39 region, and the bullish setup may take shape in the days ahead should we see a material shift in the policy outlook.

In turn, it looks as though the time is approaching to revert back to the ‘buy the dip’ strategy for the reserve currency, and we may see a move back towards near-term resistance - 10,803 (38.2 percent retracement) to 10,806 (78.6 percent expansion) – should a growing number of central bank officials highlight an improved outlook for growth and inflation. 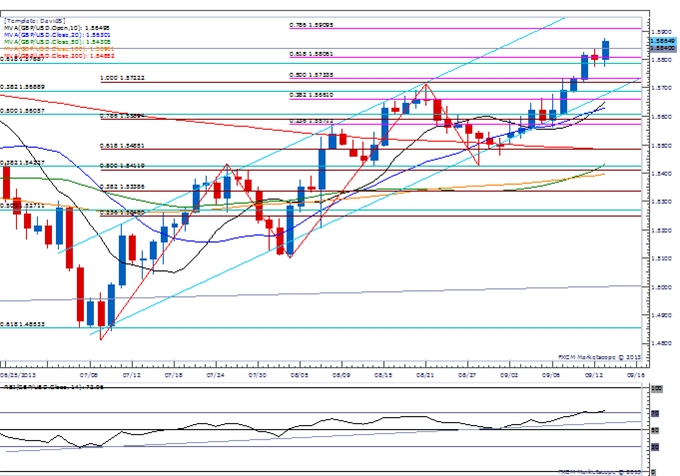 Once again, two of the four components rallied against the greenback, largely led by the British Pound, and the near-term rally in the sterling may gather pace in the week ahead should the Bank of England (BoE) Minutes highlight an improved outlook for the U.K.

Indeed, it seems as though market participants are looking for a near-term top in the GBPUSD as the DailyFX Speculative Sentiment Index current stands at -3.83, but we will need to see the RSI mark a close back below 70 to see a more meaningful correction in the exchange rate.

In turn, the British Pound may continue to mark fresh monthly highs going into next week, and we will continue to play the topside targets on the GBPUSD as the BoE scales back its dovish tone for monetary policy.