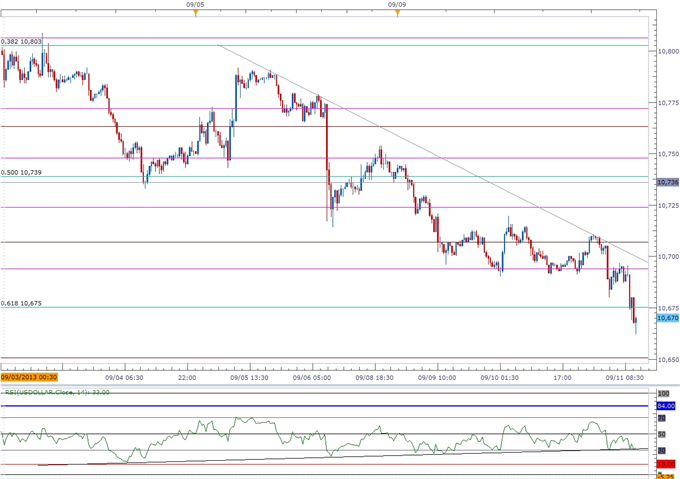 - British Pound to Consolidate Ahead of Bank of England (BoE) Testimony

The Dow Jones-FXCM U.S. Dollar Index (Ticker: USDollar) remains under pressure on Wednesday, with the greenback slipping to a fresh monthly low of 10,668, and the near-term correction may continue to gather pace over the remainder of the week as the reserve currency struggles to maintain the bullish trend carried over from the previous month.

Despite the weakness in the dollar, the bullish divergence in the 30-minute Relative Strength Index may limit the risk of seeing a run at the August low (10,646), and the dollar may regain its footing going into the end of the week as the Federal Open Market Committee (FOMC) scheduled for September 17-18 comes into focus. In turn, we may see the reserve currency build a short-term base ahead of the policy meeting, and the fresh developments coming out of the Fed is likely to heavily influence the reserve currency as the central bank looks to switch gears. 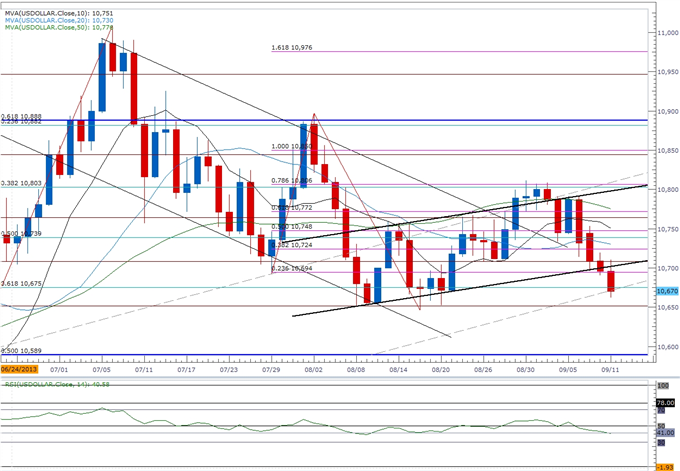 In light of the recent selloff in the USDOLLAR, we will need to keep a close eye on the relative strength index as it comes up against support (41), and a close below the key figure may bring the 38.2 percent Fib expansion back on our radar as it offers near-term support.

Nevertheless, we may see a more meaningful shift in the Fed’s policy outlook next week should the central bank start to implement its exit strategy, and we may see a growing number of central bank officials scale back their dovish tone for monetary policy as the world’s largest economy gets on a more sustainable path. 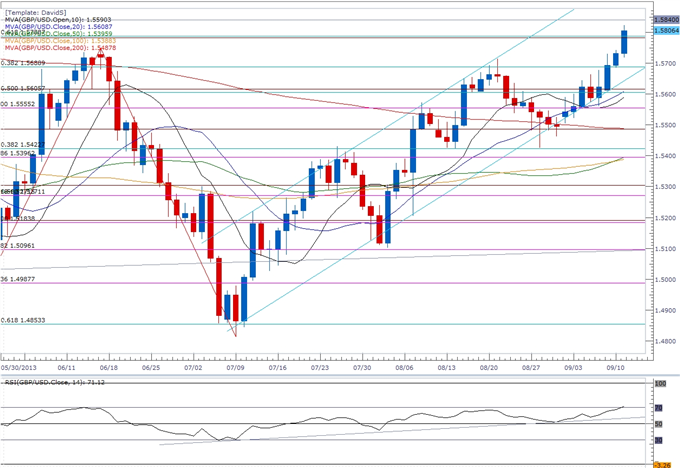 Three of the four components rallied against the dollar, led by a 0.49 percent rally in the British Pound, and the GBPUSD may continue to retrace the decline from earlier this year should the Bank of England (BoE) adopt a more hawkish tone for monetary policy.

With BoE Governor Mark Carney scheduled to testify in front of U.K. Parliament’s Treasury Committee on Thursday, the central bank head may highlight a greater risk of seeing above-target inflation for an extended period of time, and we may see the Monetary Policy Committee show a greater willingness to move away from its easing cycle as the economic recovery gradually gathers pace.

In turn, we may see a more meaningful move at the 15840 region over the next 24-hours of trading, and the bullish trend may continue to take shape in the days ahead should we see a meaningful shift in the policy outlook.--- Written by David Song, Currency Analyst