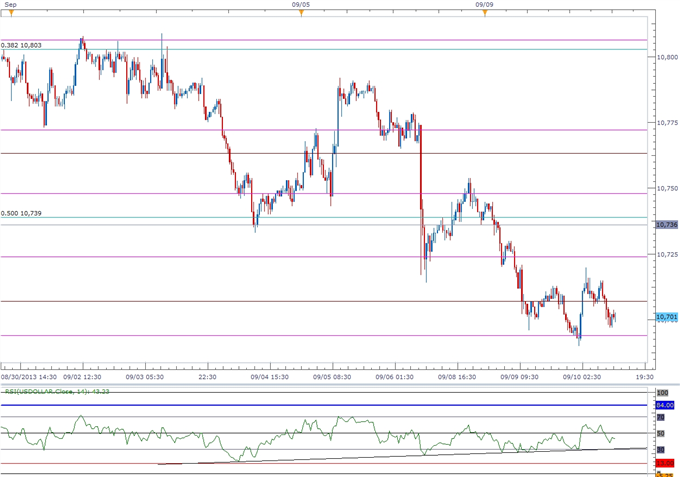 Is the USDOLLAR Correction Over? Key Setups to Watch

- Head-and-Shoulders in USDOLLAR Pans Out; Searching for Support

The Dow Jones-FXCM U.S. Dollar Index (Ticker: USDollar) extended the decline from earlier this week, with the greenback tagging a fresh monthly low of 10,691, but the reserve currency appears to be carving out a higher low ahead of the Federal Open Market Committee (FOMC) interest rate decision amid the bullish divergence in the 30-minute Relative Strength Index.

The series of higher highs paired with higher lows in the RSI should limit the bearish momentum in the dollar, and we may see a more meaningful rebound in the coming days as the oscillator continues to come off of support (13). In turn, the technical outlook suggests that the near-term correction is coming to an end, and we may revert back to the ‘buy the dip’ strategy should the dollar carve a higher base around the 23.6 percent Fibonacci expansion around 10,694. 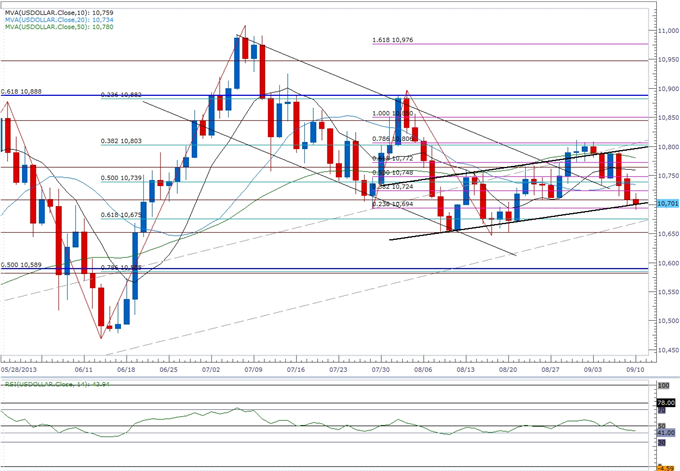 The USDOLLAR may coil up for a move higher as it appears to be carving a higher low ahead of the Fed’s September 17-18 meeting, and we will retain a bullish outlook for the greenback as long as the daily RSI holds above the 41 figure.

However, as the economic docket remains fairly light over the next 24-hours of trading, risk sentiment may continue to dictate price action across the foreign exchange market, and we will need to keep a close eye on news wires amid the headline-driven market. Nevertheless, speculation surrounding the FOMC rate decision should limit the downside risk for the greenback as the central bank looks to taper its asset-purchase program, and the bullish trend in the USDOLLAR should continue to take shape as a growing number of Fed officials turn upbeat towards the economy. 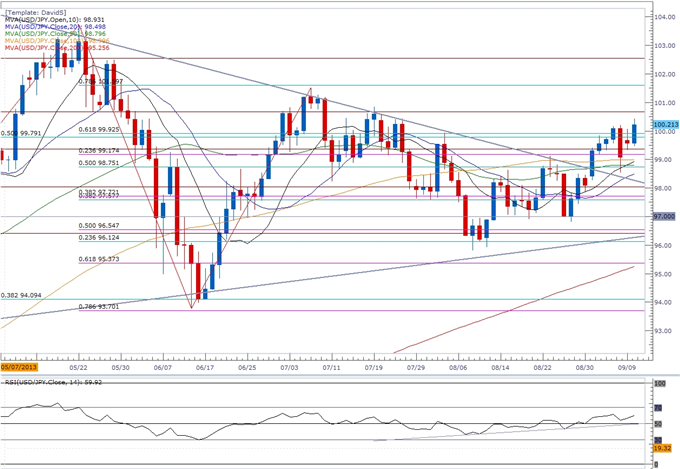 Three of the four components rallied against the dollar, led by a 0.64 percent advance in the Australian dollar, while the Japanese Yen bucked the trend, with the USDJPY advancing 0.64 percent on the day.

In light of the fresh commentary coming out of the Bank of Japan (BoJ) Minutes, it seems as though Governor Haruhiko Kuroda is ready and willing to combat any spillover effects of the first sales-tax hike in 15-years, and the central bank remains poised to further embark on its easing cycle over the coming months in order to achieve the 2 percent target for inflation.

In turn, we should see the bullish breakout continue to take shape in the days ahead, and will look for a more meaningful run at the 61.8 percent expansion around 100.60-70 amid the deviation in the policy outlook.