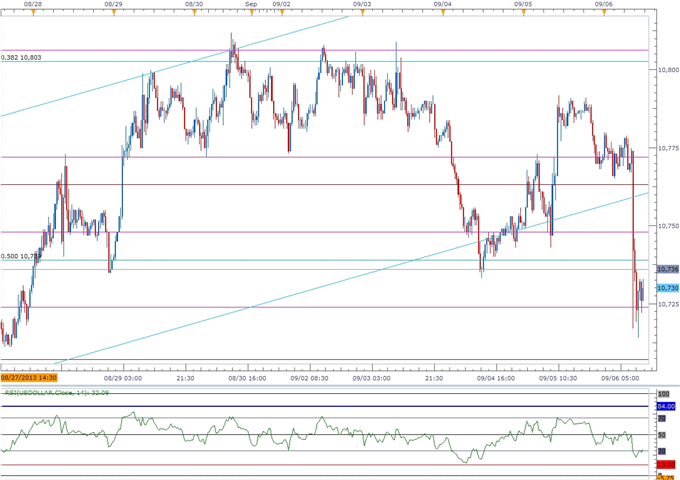 - USDOLLAR Breaks Down of Bullish Trend on Dismal NFPs

The Dow Jones-FXCM U.S. Dollar Index (Ticker: USDollar) broke down of the bullish trend following the dismal U.S. Non-Farm Payrolls report, while the greenback slipped to a fresh monthly low of 10,714 as headlines coming out of the G20 Summit dragged on market sentiment.

The dollar spiked lower as Russia reiterated its support to back Syria, but the lack of follow-through may present a short-term correction in the greenback as the 30-minute Relative Strength Index bounces back from a low of 22. As the USDOLLAR consolidates above the 50.0 percent Fibonacci expansion (10,708) and remains largely capped around 10,803 (38.2 retracement) to 10,806 (78.6 expansion), the greenback may face range-bound prices ahead of the FOMC meeting on tap for later this month, but we will need to see a greater shift in the policy outlook to see a more meaningful recovery in the reserve currency. 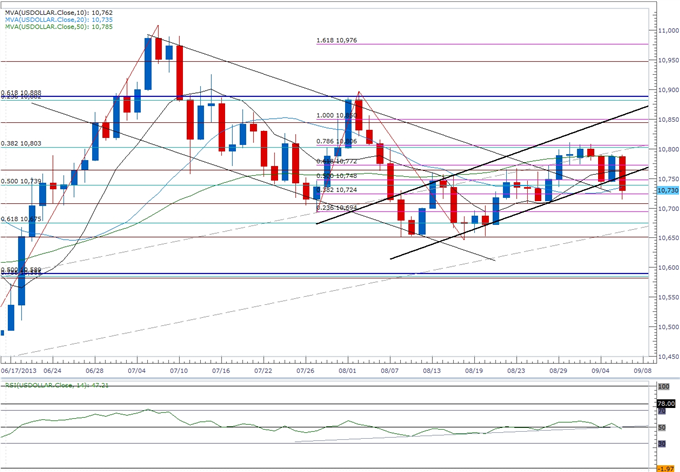 Despite the slowdown in U.S. job growth, central bank dove Charles Evans, who serves on the FOMC this year, struck a rather upbeat tone for the world’s largest economy as he anticipates a further improvement in the housing market, and went onto say that the central bank is likely to deliver the first rate hike in late 2015 amid the ongoing slack in the real economy.

From a technical standpoint, we may see an even larger correction to the downside as the RSI fails to retain the bullish trend carried over from the previous month. However, the recent weakness in the dollar may be short-lived as the Fed slowly moves away from its easing cycle, and we will continue to look for opportunities to buy the reserve currency as the USDOLLAR continues to carve a higher low. 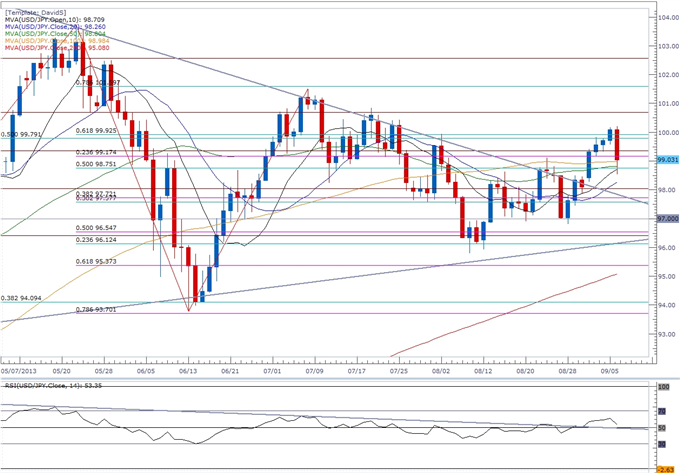 The dollar sold off across the board, led by a 1.08 percent advance in the Japanese Yen, and the low-yielding currency may continue to benefit from the Bank of Japan’s (BoJ) neutral policy stance as market participants scale back bets of seeing additional monetary support.

However, as the planned sales-tax hike dampens the prospects for private sector consumption, Governor Haruhiko Kuroda may come under increased pressure to strengthen the fragile recovery, and our game plans remains to buy dips in the USDJPY as it breaks out of the wedge/triangle formation. As the dollar-yen pushes above the 100.00 handle for the first time in July, the next level to watch comes in around 100.60-70 (61.8 percent Fib expansion), and we will continue to target upside objectives for this pair amid the deviation in the policy outlook.--- Written by David Song, Currency Analyst