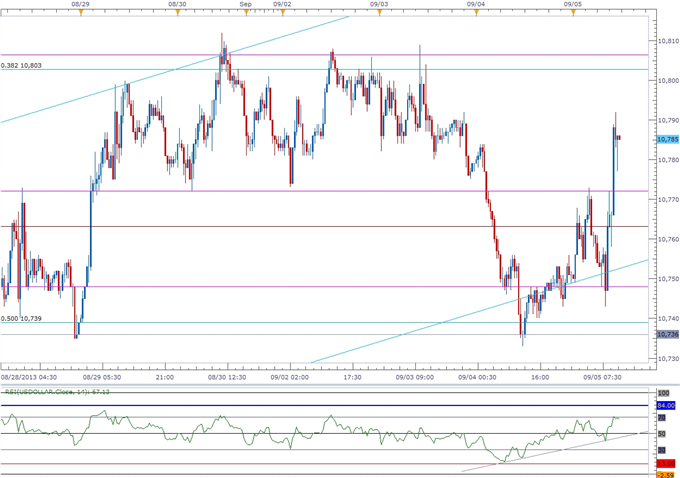 - Dollar to Consolidate Ahead of U.S. Non-Farm Payrolls

The Dow Jones-FXCM U.S. Dollar Index (Ticker: USDollar) continued to retrace the sharp decline from earlier this week amid the slew of positive developments coming out of the world’s largest economy, and the greenback may coil up for a move higher as the highly anticipated Non-Farm Payrolls report is expected to show another 180K rise in employment.

Despite the below-forecast print for the ADP report, the employment component for the ISM Non-Manufacturing survey showed the gauge climbing to 57.0 from 53.2 in July, and a further pickup in job growth should bring the topside targets on our radar in light of the growing arguments for the Federal Reserve to taper the asset-purchase program at the September 17-18 meeting. In turn, we should see the 61.8 percent Fibonacci retracement (10,772) come back as near-term support, and the bullish trend may continue to take shape in the coming days as the developments coming out of the U.S. point to a stronger recovery. 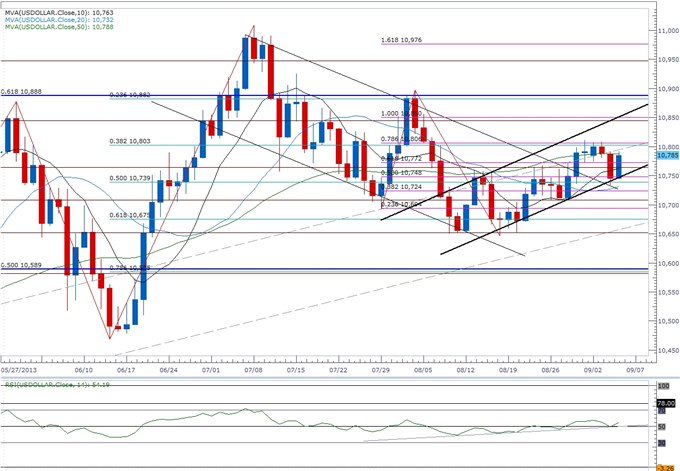 The dollar looks poised for another run into the 10,803 (38.2 percent retracement) to 10,806 (10,806 percent expansion) region as the greenback preserves the upward trend, and we will continue to implement our game plan to buy dips in the reserve currency as long as the Relative Strength Index retains the bullish momentum.

Despite the dovish remarks for Minneapolis Fed President Narayana Kocherlakota, central bank hawk Richard Fisher, who’s scheduled to join the FOMC in 2014, may counter the arguments for the FOMC to retain its highly accommodative policy stance, and the shift in the policy outlook may pave the way for a stronger dollar in 2014 as the central bank slowly moves away from its easing cycle. 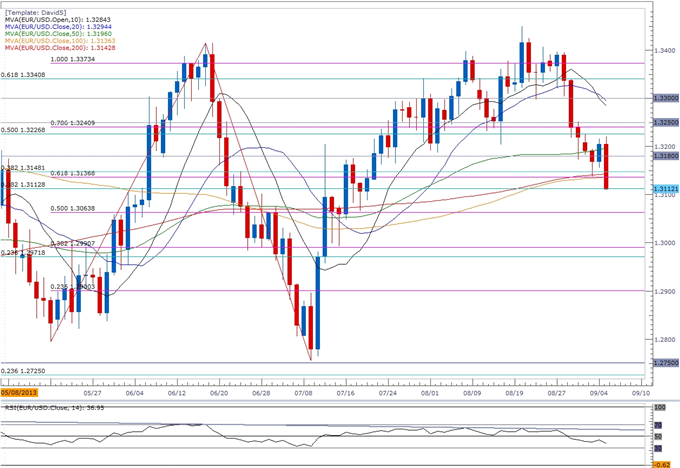 The greenback rallied across the board, led by a 0.68 percent decline in the Euro, and the single currency remains poised to face additional headwinds over the near to medium-term as the European Central Bank (ECB) adopts a more dovish tone for monetary policy.

Indeed, it seems as though ECB President Mario Draghi sees a more protracted recover in the monetary union as he spends more time in highlighting the downside risks for growth and inflation, and the Governing Council may further embark on its easing cycle over the coming months ahead the growing threat for deflation.

In light of the bearish divergence in the RSI, we will continue to target the downside for the EURUSD, and the deviation in the policy outlook favors selling bounces in the exchange rate as the ECB keeps the door open for further rate cuts.