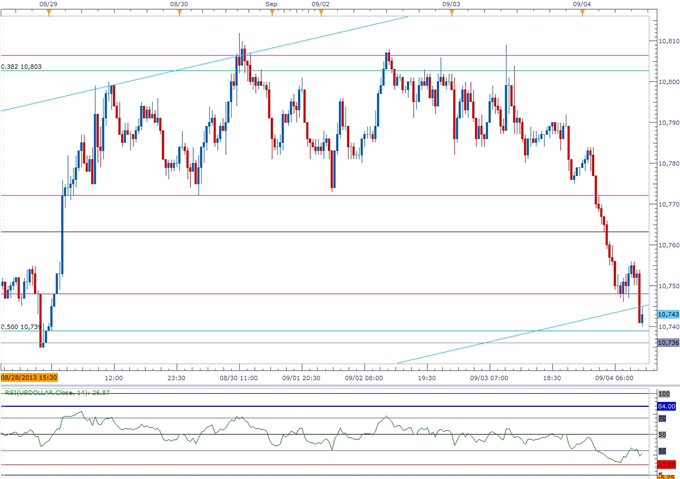 The Dow Jones-FXCM U.S. Dollar Index (Ticker: USDollar) pared the advance from the end of August, with the greenback coming up against trendline support, but the fresh batch of central bank rhetoric due out later today may spark a more meaningful rebound in the reserve currency as market participants weigh the outlook for monetary policy.

Indeed, we’re seeing the USDOLLAR preserve the bullish trend ahead of the Fed’s Beige Book as the 50.0 percent Fibonacci expansion (10,748) provides interim support, and the dollar may coil up for a move higher should the district banks highlight an improved outlook for the world’s largest economy. At the same time, San Francisco Fed President John Williams may sound a little more upbeat this time around as the encourages the FOMC to keep an ‘open mind’ at the September 17-18 meeting, and the dollar may continue to carve out a series of higher highs paired with higher lows amid the growing discussion at the central bank to scale back on quantitative easing. 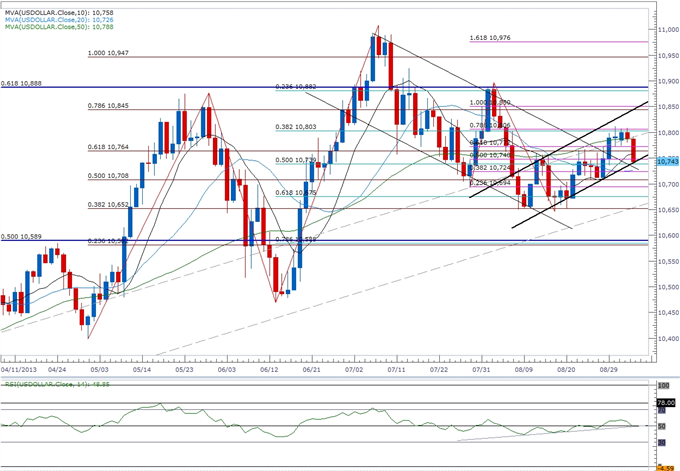 The dollar appears to be facing a near-term correction as it falls back from resistance - 10,803 (38.2 retracement) to 10,806 (78.6 expansion) – and the bullish trend may continue to take shape over the near to medium-term amid the shift in the policy outlook. For further confirmation, we would like to see the relative strength index maintain the bullish momentum, but a break lower may produce a larger correction in the dollar as it remains largely capped by the 10,803-10,806 region.

Nevertheless, there’s growing speculation that the FOMC will switch gears later this month as growth and inflation picks up, and technical outlook continues to point to a stronger dollar as it carves out a key low around the 38.2 percent expansion (10,652). 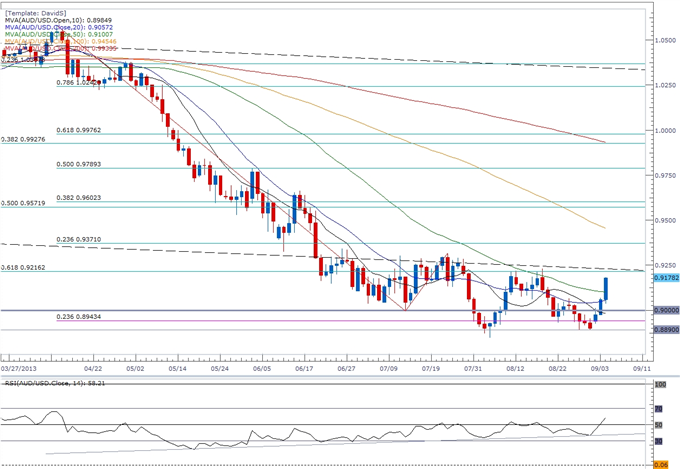 Three of the four components strengthened against the greenback, largely driven by a 1.28 percent rally in the Australian dollar, and the AUDUSD appears to be making a run at the 0.9210-20 region (61.8 percent retracement) as the 2Q GDP report dampens bets of seeing the Reserve Bank of Australia (RBA) further embark on its easing cycle.

Indeed, the AUDUSD broke out of the bearish trend carried over from August amid the positive developments coming out of the Asia-Pacific region, but the pair may ultimately face range-bound prices over the near-term as it comes up against former trendline support. Despite the rebound in the exchange rate, we anticipate the RBA to retain a rather dovish tone for monetary policy amid the slowing/uneven recovery in the $1T economy, and the pair looks poised to preserve the long-term bearish trend as the outlook for growth and inflation remains subdued.