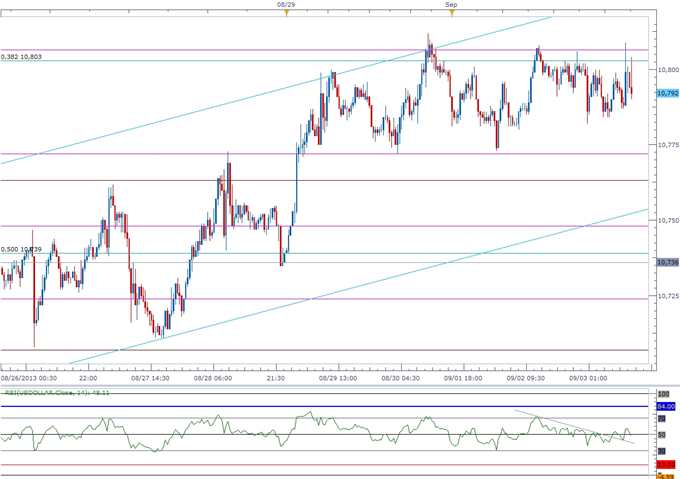 The near-term correction in the Dow Jones-FXCM U.S. Dollar Index should provide a buying opportunity as the bullish trend continues to take shape.

The Dow Jones-FXCM U.S. Dollar Index (Ticker: USDollar) is struggling to maintain the advance to 10,810 despite the slew of positive developments coming out of the world’s largest economy, and the greenback may continue to consolidate during the North American trade as the ISM Manufacturing employment component highlights a slower rate of growth in the U.S. labor market.

Indeed, the dollar looks poised for a pullback as it comes up against interim resistance (10,803-10,806), but the recent weakness in the greenback is likely to be short-lived as the 30-minute relative strength index fails to maintain the bearish trend. In turn, the near-term correction may provide us with an opportunity to buy the reserve currency at a lower price, and the reserve currency appears to be coiling up for a move higher as former resistance (10,772) continues to offer support. 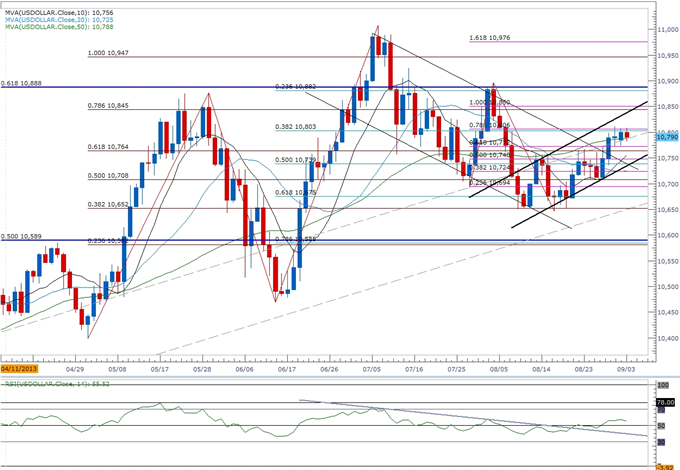 A topside break in the USDOLLAR should bring the 10,845 (78.6 percent expansion) – 10,850 (100.0 percent expansion) range on the radar, and the Fed’s Beige Book may spark a near-term rally in the reserve currency should we see a greater number of district banks highlight a stronger recovery.

A more upbeat Beige Book may heighten the case for the FOMC to start tapering its asset-purchase program at the September 17-18 meeting, and we are likely to see a further shift in the policy outlook as the U.S economy gets on a more sustainable path. As a result, we will continue to look for a series of higher highs paired with higher lows, and the dollar may ultimately mark fresh yearly-highs over the near to medium-term as the central bank moves away from its easing cycle. 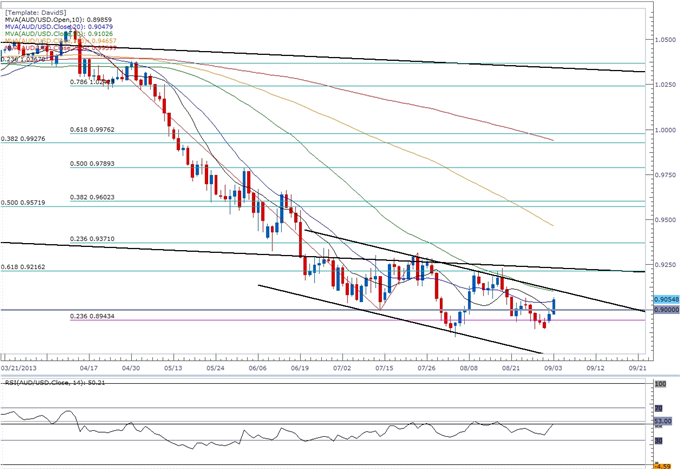 Three of the four components weakened against the greenback, led by a 0.27 percent decline in the Euro, while the Australian dollar is bucking the trend as the Reserve Bank of Australia (RBA) kept the benchmark interest rate at 2.50 percent in September.

The RBA struck a rather neutral tone for the region, stating that the current policy stance remained appropriate, but the central bank may further embark on its easing cycle as the outlook for inflation remains subdued. At the same time, it seems as though Governor Glenn Stevens continues to favor a lower exchange rate to further assist the rebalancing of the real economy, and the central bank may continue to verbally intervene in the FX market to help address the risks surrounding the region.

In turn, we will retain our bearish forecast for the AUDUSD as it remains in a consolidation phase, and the relative strength index may provide a potential trigger to short the higher-yielding currency should the oscillator continue to find resistance around the 53 figure.