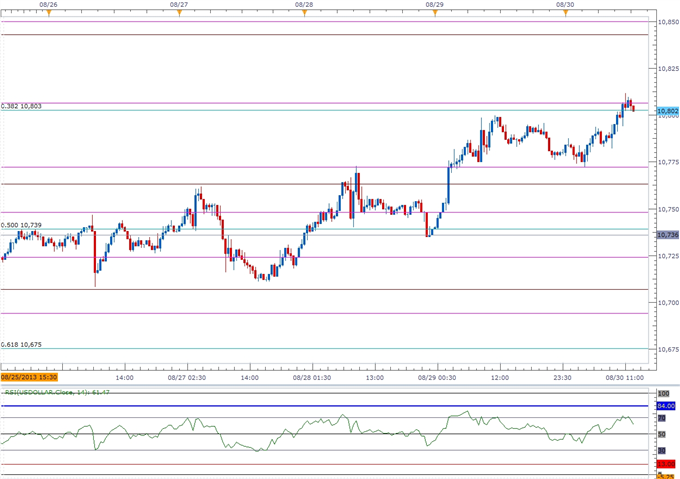 The breakout in the Dow Jones-FXCM U.S. Dollar Index looks poised to gather pace in September as the Federal Reserve looks to taper its asset-purchase program.

The Dow Jones-FXCM U.S. Dollar Index (Ticker: USDollar) extended the overnight advance and climbed to a fresh monthly high of 10,812 following the larger-than-expected upward revision in the U. of Michigan Consumer Confidence survey, and the reserve currency should continue to track higher in the week ahead as it breaks above resistance.

In turn, the next topside target comes in around the 10,845 region, the 78.6 percent Fibonacci expansion, and the bullish sentiment surrounding the greenback should gather pace over the near to medium-term amid growing speculation that the Fed will taper its $85B asset-purchase program at the September 17-18 meeting. However, as the 30-minute relative strength index comes off of overbought territory, we may see a short-term pullback going into the weekend, and former resistance (10,764) should provide support as the dollar continues to carve a series of higher highs paired with higher lows. 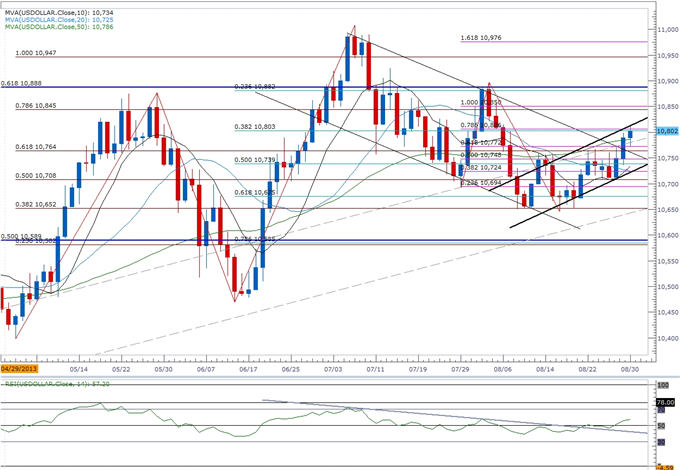 With the Fed’s Beige Book due out next week, a more upbeat tone from the district banks may further the Fed’s argument to move away from its easing cycle, and we will continue to look for opportunities to buy dips in the greenback amid the shift in the policy outlook.

At the same time, the U.S. Non-Farm Payrolls may also prop up the dollar as employment is expected to increase another 180K in August, and we may see a growing number of Fed officials start to adopt a more hawkish tone for monetary policy as growth and inflation picks up.

With that said, the upward trending channel in the USDOLLAR should continue to take shape, but the developments coming out of the G20 Summit on September 5-6 may mitigate volatility in the dollar as the global community becomes increasingly reliant on Fed support. 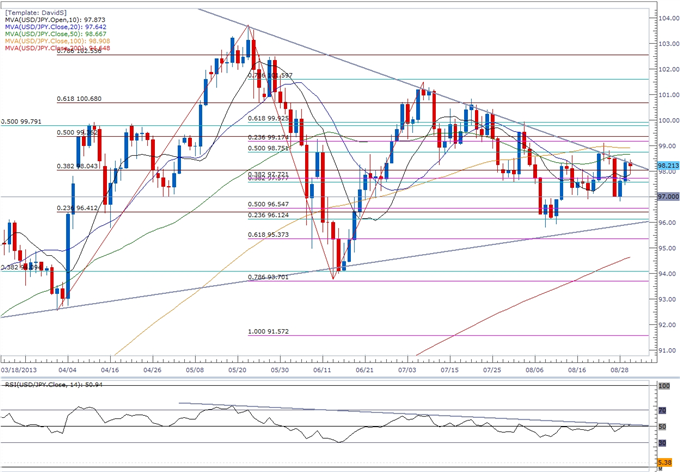 Three of the four components weakened against the greenback, led by a 0.29 percent decline in the Australian dollar, while the Japanese Yen bucked the trend, with the low-yielding currency advances 0.14 percent amid the pickup in price growth.

Indeed, the headline reading for Japanese inflation increased an annualized 0.7 percent in July to mark the biggest advance since November 2008, and the faster rate of price growth may encourage the Bank of Japan (BoJ) to retain its current policy at the September 4-5 meeting as the fundamental outlook for the region improves. However, the bearish momentum in the USDJPY appears to be coming to an end as the pair maintains the upward trend dating back to February, and we may see a breakout next week should BoJ Governor Haruhiko Kuroda show a greater willingness to implement more non-standard measures later this year.